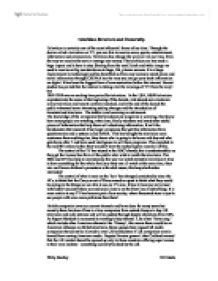 Television Structure and Ownership Television is certainly one of the most influential forces of our time. Through the device called a television or TV, you are able to receive news, sports, entertainment, information and commercials. Television has change the way we live our lives, from the way we receive the new or manage our money. The television era has made a huge impact and is here to stay. Starting from the small black and white image we used to receive on big wooden boxes to huge, flat, plasma screens. It is a huge improvement in technology and has benefited us from easy access to stock prices and travel information through CEEFAX too the way you can get your bank information on digital. It has been the biggest form of communication before the internet. Recent studies has proved that the internet is taking over the viewings of TV from the way I has 1950-1959 was an exciting time period for television. In the USA, B&W television exploded onto the scene at the beginning of the decade, mid-decade saw electronic colour television and remote controls launched, and at the end of the decade the public witnessed some interesting styling changes and the introduction of transistorised television. ...read more.

British companies own our current channels and have done for many years but recently there has been Plans to allow companies from outside Europe to buy UK television and radio stations and will be pushed through despite objections from MPs. As Rupert Murdock is rumoured to wanting to buy channel 5, he owns 'News corp.' which include other American channels like 'Disney', this means there would be an American influence on British television, Some groups have argued US media companies should not be allowed to own UK broadcasters if UK companies remain barred from owning American media. Deputy Director general John Cridland warned that the UK market should be opened up only to those countries offering equal access to their own markets - something currently blocked by the US. Commercial television began on the 22nd September 1995; views watched the first ever British broadcast advert for Gibbs SR Toothpaste. Governed by the ITA (Independent Television Authority) slots were allocated for different regional franchises on a fixed term basis. The ITA required the contractors (program producing companies) ...read more.

Many films were made incorporation plastic models into the picture but The Matrix was the first film to take real advantage of the abilities that computers had to offer and the film really pushed the boundaries out, it is a milestone of cinema and TV. On the 19th of January 1972 all restriction on broadcasting were lifted this was the era of modern television. This was the era that unemployment increased as the fall of huge industries like the coal mining and ship building caused unemployment's. In 1970 only 775,000 colour TVs were sold but in 1973 the number leaped to 6 million and in 1977 more homes owned a colour TV than a phone. Between 1961 and 1986 average weekly viewing doubled from 13.5 to 26 hour. Nearly 80% of people watched television at some point during the day becoming the main relaxation tool. We have excelled our technology even further and have made it possible to get bank details on screen get our own selection of music playing change camera views of certain programs like big brother. It's a huge increase in control from the consumers' point of view. Philip Bradley Yr0 Media ...read more.