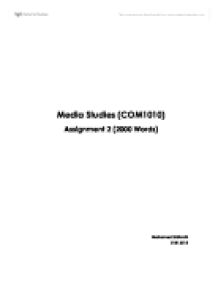 Media Studies (COM1010) Assignment 2 (2000 Words) Mohamed Sidhrath 21813515 This essay will highlight the following news items based on textual analysis and critical, political economy. The news item addresses the issue related to war in Sri Lanka between the government and the Liberation Tigers of Tamil Eelam, the Tamil tigers. An online news publication and video reports is compared in this essay. The video news report by Al Jazeer reported on 12th May "Concerns rise over Sri Lanka civilian deaths " and the news article published by CNN on May 5th "Sri Lankan president declares success over rebels " is more likely to give its readers with different opinions based on textual analysis as well as the critical, political economy. The video report shows concern towards the war and death of civilians, which a viewer will instantly get by the title itself and in depth after viewing the report and listening to the report saying that Tamil tigers using civilians as human shields and government attacking them. However the CNN report title seems to give another impression as it says the crisis is more successfully tackled which however doesn't seem to take into account the government's failure to provide civil safety due to war. ...read more.

When selecting news, policy, media, corporate and public agenda is amplified. Like CNN having its own agenda on corporate and policies while maybe different from of what of AL Jazeera. Critical Political Economy as defined in Media Studies as the theory which emphasizes how media production in an industry dominated by those who are the most powerful in society, who commoditize media products to generate profits and spread their ideology. The elite person does this. The Al Jazeera and CNN has agenda's which are shaped according to the ownership and the background of the company. The politics which is everywhere, it's the science and art of governing a country and maneuvering for power within a group, it influences on over the media. The economics is the science concerned with earning profits or maximizing it by delivering the news as the products or good. The textual analysis did the possible meanings from the text, the political economy approach more concerned with how the political or economical forces framing the media. Political economy is further contrasted into Liberal political economy and Critical political economy. Liberal political economy focuses on market exchanges, mechanisms and sovereignty of the individual consumer. And consumers are supposed to choose based on their satisfaction and have greater individual consumer choices. ...read more.

Unduly influencing what people see, hear and think can be done by news proprietors. The CNN might be potentially abusing power by sending biased coverage to wide audience. Compared to Al Jazeera, CNN has wider network. As the critical political economists are more concerned presenting their views over of the other cultural forms. The understanding of the text also depends somewhat on the medium. Printed publication is less effective than the video or visual mediums. In this case CNN with a written news and Al Jazeera with a video report. The CNN publication needs to be read and understood which requires, reading capacity to the audience. However the video showing footage of the action scenes obviously makes sense to the audience without reading capacity. The written news needs to be read for understanding; however more visual as image gives the audience a quick meaning based on their ideology and social background. Sounds also add life to the images or video. It can be consumed then by people who might not have eyesight or read if deaf. As a conclusion, it seems for me that the Al Jazeera news video report is more accurate and provides with a clear reality. CNN has biased and incomplete presentation of the news, which is more influenced by the ownership policy and political agenda. ?? ?? ?? ?? ...read more.