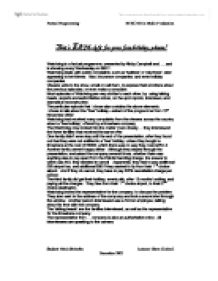 That's �876.49 for your free holiday, please! Watchdog is a factual programme, presented by Nicky Campbell and ..., and is showing every Wednesday on BBC1. Watchdog deals with public complaints, such as 'builders' or 'plumbers', later appearing to be thieves. Also, insurance companies, and even holiday companies. Viewers write to the show, email or call them, to express their emotions about the previous episodes, or even make a complaint. Most episodes of Watchdog are very similar to each other, by using talking heads, experts and authoritative voices, on the spot reports, interviews, and dramatical reconstruction. The particular episode that I chose also contains the above elements. ...read more.

Apparently, they had to pay additional �60 airport tax, and additional �90 if they wanted to fly from their 1st choice airport. And if they do cancel, they have to pay �279 cancellation charge per person. The third family did get their holiday, eventually, after 12 months' waiting, and paying all the charges. They flew from their 1st choice airport, to their 2nd choice destination. Watchdog invited the representative for the company, to discuss the problem. They also went to the address of the company and took a secret shot through the window. Another person interviewed was a former employee, talking about his time with the company. The 'talking heads' are the families interviewed, as well as the representative for the timeshare company. The representative from ... ...read more.

The actual programme, in my opinion, is very believable, as things like this can happen to any one of us. I, myself, received a letter once, saying that I have been entered in the prize draw and have won a brand new BMW. In order to receive my prize I had to send a �25 handling charge. I had no idea where they got my details from, but was thinking of accepting this offer. Luckily for me I had accidentally frown the letter away, and did not pay the charge. Therefore, I was very relieved when later I saw a TV programme about this kind of offers. Due to my own experience and the style of the programme I believe that Watchdog is a real and honest show. Factual Programming BTEC ND in Media Production Student: Maria Strinatko Lecturer: Steve Cockrell December 2002 ...read more.