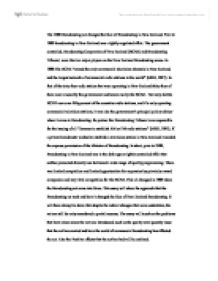 of the act the commission must take into account when assessing funding for a project "The potential size of the audience likely to benefit from the project to which the proposal relates" (Broadcasting act 1989 section 39(b). When we combine the statements made in this section with those of Section 36(c), we can be begin to see the flaws. NZOA must cater for minority audiences but must also make sure that a sizable audience exists for each project, this is a confusing concept that the act creates. Not only is the concept confusing but it also poses the question. With the responsibility to provide programming for large groups of New Zealanders has NZOA gotten lazy and taken the easy option of quantity over quality? Minority group programming is classified by NZOA as being "Information Programming". Programmes such as Tagata Pacifica and Queer Nation fit under this classification. NZOA's records show that from 1995 through to 2002 the hours devoted to Information Programming tripled. However this is not a reflection on the quality of the programming. The rise of reality television in New Zealand has sparked many debates in New Zealand about the quality of the programming provided by NZOA. ...read more.

However it is time that the 1989 strategy had an overview to increase its effectiveness and relevance in the years to come. The Ministry of Culture and Heritage is investigating the most appropriate way for the funding of New Zealand programming to continue in the coming years. At this months forum celebrating the forty fifth anniversary of New Zealand television Broadcasting Minister Steve Maharey summed up the situation "Public television broadcasting is thriving in New Zealand alongside a successful commercial industry, the challenge now is how our relatively small industry can continue to grow and move forward amidst a period of unprecedented change."(Maharey, June 2005, extracted from www.beehive.govt.nz) This review of the industry may find that many of the reforms of 1989 are no longer appropriate in today's media environment and if it does New Zealand Broadcasting could find itself in another period of great change similar to that experienced in the later part of the eighties. Mind you however flawed the 1989 Broadcasting act was it provided New Zealand Broadcasting with a great service. It brought it out of the dark ages and for that every New Zealander that interacts with the media today, weather it be simply watching television, or, by active involvement in the industry, should be thankful for what the act achieved, even if it the act never realized its full potential. ...read more.