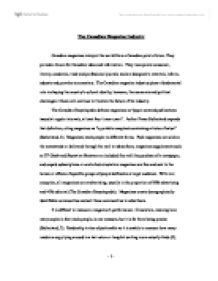 The Canadian Magazine Industry Canadian magazines interpret the world from a Canadian point of view. They provide a forum for Canadian ideas and information. They incorporate consumer, literary, academic, trade and professional journals and are designed to entertain, inform, educate and provoke commentary. The Canadian magazine industry plays a fundamental role in shaping the country's cultural identity; however, the economic and political challenges it faces will continue to threaten the future of the industry. The Canadian Encyclopedia defines magazines as "paper-covered publications issued at regular intervals, at least four times a year". Author Fraser Sutherland expands that definition, citing magazines as "a portable receptacle containing articles of value" (Sutherland, 2). Magazines reach people in different forms. Paid magazines are sold on the newsstands or delivered through the mail to subscribers; magazines supplements such as TV Guide and Report on Business are included free with the purchase of a newspaper; and unpaid subscriptions or controlled-circulation magazines are free and sent to the homes or offices of specific groups of people defined as a target audience. With rare exception, all magazines carry advertising, usually in the proportion of 60% advertising and 40% editorial (The Canadian Encyclopedia). Magazines create demographically identifiable communities and sell those communities to advertisers. It is difficult to measure a magazine's performance. ...read more.

Today, the problems facing the industry are many, but they all have much to do with the fact that we live next door to the world's most powerful economic and cultural country. For instance, Canadian magazines are threatened by: the U.S. domination on the newsstands; American split-run publications that take advertising dollars from their Canadian counterparts; and the loss of Canadian writers and contributors to the U.S. As previously described, attempts to protect Canadian culture from American domination is nothing new. In 1970, a Canadian governmental Committee on Mass Media concluded that "magazines constitute the only national press we possess in Canada. Magazines, in a different way from any other medium, can help foster in Canadians a sense of themselves" (Center for Strategic and International Studies [CSIS]). In recognition of the role magazines play in Canadian cultural expression, "successive governments have put in place policies that ensure that Canadians have access to Canadian ideas and information through a genuinely Canadian magazine industry" (Copps). Granted, evidence over the years proves that the Canadian magazine industry does play a crucial role for Canadian cultural expression, however, the challenges it continues to face is threatening the future of the industry. Carleton journalism and international affairs professor Andrew Cohen stated that "Magazines in Canada are in a fix. ...read more.

According to the Canadian Magazine Publishers Association, the CMF cut, added to the $15 million already cut in the federal budget, amounted to a 40% decrease in federal cultural investment in the magazine sector. Sue Fredericks, chair of the Canadian Business Press, says that "many consumer magazines will probably find it no longer viable for them to publish" (Young). There is no doubt that Canadian magazines need to survive because they play a fundamental role in the country's cultural identity. Titles like Maclean's, Saturday Night and Weekend form an important part of our cultural heritage. Over the years, the combination of Canadian creativity and government policy has led to considerable success for Canadian magazines. However, the truth of the matter is that the Canadian magazine industry will continue to suffer from budget cuts, loss of writers to the U.S, and most of all, because of the domination of the American magazines on our newsstands. Canadians have all the talent and energy needed to compete at any level, however a simple economic principle like economies of scale guarantee that the U.S. could eventually own the majority of the cultural products consumed in Canada, magazines included. Canadian magazines have enjoyed success over the years and they are an influential medium for sharing ideas, but as a business, it continues to suffer in a field dominated by foreign competition. ...read more.