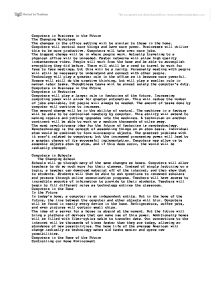 The changing face of Computers in Business and schools in the Future.

Computers in Business in the Future The Changing Workplace The changes in the office setting will be similar to those in the home. Computers will control more things and have more power. Businesses will utilize this to be more productive. Computers will take over more jobs. The biggest change will be in where people work. Actually traveling to a physical office will be unneeded. Faster networks will allow high quality instantaneous video. People will work from the home and be able to accomplish everything they did before. There will still be a need to travel to work for face to face meetings, but this will be a rarity. Personally meeting with people will still be necessary to understand and connect with other people. Technology will play a greater role in the office as it becomes more powerful. Humans will still do the creative thinking, but will play a smaller role in manual labor tasks. Thoughtless tasks will be almost solely the computer's duty. Computers in Business in the Future Computers in Factories Computers will play a larger role in factories of the future. Increasing computing power will allow for greater automation. This will reduce the number of jobs available, but people will always be needed. The amount of tasks done by computer will continue to increase. The second change will be in the ability of control. The machines in a factory will be able to be controlled remotely by computer. This ability will extend to making repairs and putting upgrades into the machines. A technician on another continent will be able to work on a machine thousands of miles away. The most revolutionary idea for the future of factories is nanotechnology. Nanotechnology is the concept of assembling things on an atom basis. Individual atom would be combined to form microscopic objects. The greatest problems with it aren't related to computers, but the increased processing power will lead to a greater chance of its successful implementation. ...read more.

Research also addresses how the computer might select the correct meaning of an utterance. Co-edited books specializing in parallel computers (supercomputers) and the characteristics of parallel algorithms. Served as an associate editor for international journals on parallel and distributed computing, and speech and signal processing. Served on advisory committees of the National Science Foundation and the Army Research Office. Co-directs undergraduate engineering course in which students complete community service projects. Is co-chair of the Computing Research Association's Committee on the Status of Women in Computing Research Flat Panel Displays Perhaps one of the biggest changes in the future won't be in what we are seeing on computer monitors, but in the monitors themselves. Monitors today can weigh up to 50 pounds, and take up a considerable amount of desk space. This is the area where the monitors of the future will amaze us. They will be inches thick and provide picture quality better than anything attainable now. Companies have already released liquid crystal displays (LCD) though the prices remain near one thousand dollars. LCD monitors do not require tubes, the main space taker in a CRT display. Instead LCD monitors work by passing a current through an electrically active substance. These new monitors are just inches thick. Although the technology is here now, LCD monitors will not take off until after the year 2000. The prices today are too high, and the advantages aren't great enough. But once the prices lower, the average user will have access to flat panel displays. The entire computing experience will be redefined as monitors hang on the wall instead of sitting on a desk. It will be possible to put a monitor in the middle of a room, and put the computer itself somewhere else. Even today, we can begin to see a glimpse of the monitors that come after LCD monitors. Companies have already begun testing monitors that would be millimeters thick. ...read more.

The first month Bill Clinton was in the office of the Presidency, he set in motion getting the entire Library of Congress digitized so that all can access it, and have the benefits of that data base being available at their finger tips. There is nothing else that the President of the United States could have done that would be of more value to the United States, and the World, than digitizing the Library of Congress, for this library contains all books in the English Language. Having the Library of Congress on a data base that all can access will move the world ahead in ways that no one can imagine at this time. Knowledge is power. Everyone will have the power of the knowledge of the Library of Congress once the digitizing of the books is completed and put on line. More information will be shared by business and technology, via the internet. There will be technical libraries which will cause new developments that we cannot dream of at this time. The development of science will speed up at an incredible rate with scientific data being put in digital form and available over the Internet. Things are changing fast now. The rate of change we have at this time is very slow compared to the rate of change which will occur when the information of the world, the scientific data of the entire world, is digitized and made available for all to use. The Internet will affect the world more than the Printing press affected change, at a much faster rate. Of course there will still be business and technology secrets by corporations, but the basic scientific data will be available for all to use in research and development. Going into the new millennium, we will be going into an era where there will be things we cannot dream of at this time. The rate of human advancement will be so great that no one can imagine what it will bring. ...read more.