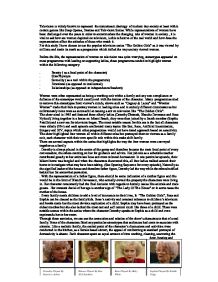 The depiction of gender within sitcoms. For this study I have chosen to use the popular television series The Golden Girls.

Television is widely known to represent the mainstream ideology of modern day society at least within certain genres like Soap Operas, Dramas and Television Series. While representations of women have been challenged over the years in order to accommodate the changing role of women in society , it is vital to ask how are women depicted on television, is this reflective of the real world and how does the representation affect the attitudes of those who watch it. For this study I have chosen to use the popular television series "The Golden Girls" as it was viewed by millions and made its mark as a programme which defied the way society viewed women. Before the 80s, the representation of women on television was quite worrying, stereotypes appeared on most programmes with leading or supporting ladies, these programmes tended to highlight women within the following category: . Beauty ( as a focal point of the character) . Size/Physique . Sexuality ( as a tool within the programme) . Emotional (as opposed to intellectual) . Relationships (as opposed to independence/freedom) Women were often represented as being a working unit within a family and any non compliance or defiance of the stereotype would usually end with the demise of the character . ...read more.

Like a realistic family, the central point of the character's discussions and activities were conducted in the kitchen, as a female based sitcom, the appeal of conforming to standard portrayal of domesticity is absent. Each character spent an equal amount of time cooking, cleaning, answering the door, hosting and engaging in familiar feminine groups like "The Elvis, honky tonky burning love fan club", which was featured In one of the episodes. After establishing the characters as a working family unit, we now need to analyse how realistic the representations were? And if they were based on the lives of real elderly women? In Jonathan Bignell's "An Introduction To Television Studies", he uses the American sitcom "Sex And The City" for his case study and relates the aspects like those illustrated for "The Golden Girls" to mark the similarity between the show and real life women. "The programme establishes a structure of feeling that is not unique to Sex and the City but that television audiences are already familiar with and in which they are invited to participate". Based on his theory we can deduce that a unique audience found interest in the series as well as a sense of fantasy lifestyle that also appeals, but this study is based on a sitcom surrounding middle aged women. ...read more.

Each main character was depicted with a sense of an alternative view on women. Like Sex and the city, viewers tended to see themselves as one of the characters based on their own view of life. The show reached its final episode in 1992, when Dorothy married Blanche's Uncle played by Leslie Nielson and moved away . Another short lived sitcom was made after the finale and featured the remaining three characters Blanche, Rose and Sophia but unfortunately it did not receive as much interest as the previous series. This was undoubtedly due to the fact of a missing element in the form of Dorothy, without the presence of a family unit or in the case of Dorothy's character, a father figure, many viewers could not relate or feel a sense of realism within the show and so it was taken off after just two seasons. The original "Golden Girls" is an exceptionally good comedy series and is a must have in any DVD collection, it's a shame there will never be another sitcom much like it which would represent its intended minority in a positive but entertaining fashion. Sources . An Introduction To Television Studies: Jonathan Bignell. . Women Watching Television, Gender, Class and Generation In The American Television Experience: Andrea L.Press . http://www.museum.tv/archives/etv/H/htmlH/harrissusan/harrissusan.htm . http://www.mediaknowall.com/gender.html . http://en.wikipedia.org/wiki/The_Golden_Girls . http://www.aber.ac.uk/media/Students/hzi9401.html ...read more.