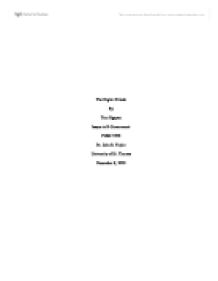 The Digital Divide By Tam Nguyen Issues in E-Government POSC 3338 Dr. John R. Taylor University of St. Thomas December 9, 2003 The Digital Divide Effects of the new technology also follow social class lines. The higher one goes up the social ladder, the more this technology is benefit. The new technology assists the upper middle class, for their education prepares them to take a leading role in managing the global system for using the new technology to progress in their chosen occupations. This new technology opens and closes opportunities for people largely by virtue of where they are located on the social class ladder. For people 500 years ago, the new technology was the printing press. For people today, the new technology consists of computers and various forms of the electronic media. In Bill Gates' 1995 book, The Road Ahead, he, a Microsoft cofounder and Chairman, states: Technological progress will force all of society to confront tough new problems, only some of which we can foresee.... Societies are going to be asked to make hard choices in such area as universal availability, investment in education, regulation, and balance between individual privacy and community security (Gates 1995, 252). Digital divide refers to the technology gap between the poor and the middle and upper classes. The so-called "haves" and "have-nots" also have a race-ethnic constituent. Because a larger proportion of minorities are poor, compared with whites, a smaller percentage of African-Americans, Latinos, and Native-Americans have access to computers and the Internet. If the people who live in poverty have less access to computers and the Internet, their disadvantage in the new technology will grow. If computers were only for playing cyber games, this would not be an issue. But the Internet has become a major source of information. Almost every grade school in the United States introduces its student to the computer. Children learn how to type on it, as well as how to use mathematics and science software. ...read more.

People with a disability are more likely to be left behind. People with a disability are only half as likely to have access to the Internet at homes as those without a disability. 21.6 percent compared to 42.1 percent. Just fewer than 25 percent of people without a disability have never used a personal computer; close to 60 percent of people with a disability have never used a personal computer. People with impaired vision and problems with manual dexterity use the computer less than those with hearing difficulties. Technology offers enormous potential for this group of individuals, but they have the lowest use rates. Geographic also plays an important part in this account. As stated in the study of Stephen G. Kastsinas and Patricia Moeck, The Digital Divide and Rural Community Colleges: Problems and Prospects: Those living in rural areas at the lowest income levels are among the least connect. Rural households earning less than $5,000 per year have the lowest telephone penetration rates (74.4%), followed by central cities (75.2%) and urban areas (76.8%). In 1994, by contrast central city poor were the least connected. Rural households earning between $5,000-$10,000 have the lowest PC-ownership rates (7.9%) and on-line access rates (2.3%), followed by urban area (10.5%, 4.4%) and central cities (11%, 4.6%) (Kastsinas and Moeck 2002, 214). Rural areas are less likely to be connected than urban area. People who live in rural area are lagging behind in Internet access. At some income level, those in urban areas are more likely to have Internet access than those earning the same income in rural areas. Low-income households in rural areas are the least connected to the Internet. Although the Internet has proven to be an excellence source of information for it is both easily accessible and immediate, however, this advancement in technology has increased the gap between the "haves" and the "have-nots." Gaps remaining between different racial ethnic groups, marital status, the old and he young, the educated and less-educated, and people with different levels of income. ...read more.