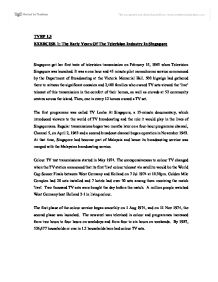 The Early Years Of The Television Industry In Singapore

TVRP L3 EXERCISE 1: The Early Years Of The Television Industry In Singapore Singapore got her first taste of television transmission on February 15, 1963 when Television Singapura was launched. It was a one hour and 45 minute pilot monochrome service commenced by the Department of Broadcasting at the Victoria Memorial Hall. 500 bigwigs had gathered there to witness the significant occasion and 2,400 families who owned TV sets viewed the 'live' telecast of this transmission in the comfort of their homes, as well as crowds at 52 community centres across the island. Then, one in every 12 homes owned a TV set. The first programme was called TV Looks At Singapore, a 15-minute documentary, which introduced viewers to the world of TV broadcasting and the role it would play in the lives of Singaporeans. ...read more.

Two thousand TV sets were bought the day before the match. A million people watched West Germany beat Holland 2-1 in living colour. The first phase of the colour service began smoothly on 1 Aug 1974, and on 11 Nov 1974, the second phase was launched. The newsreel was televised in colour and programmes increased from two hours to four hours on weekdays and from four to six hours on weekends. By 1987, 526,677 households or one in 1.2 households here had colour TV sets. In August 1965, Singapore separated from Malaysia, thus television broadcasting became a state-run operation under Radio Television of Singapore (RTS). The RTS was authorized to use television broadcasting to encourage national development. ...read more.

In 1994, SBC became a corporation in order to introduce more competition into the local broadcast industry. Later that year, the Singapore Broadcasting Authority was set up as a statutory body under the Ministry of Information, Communications and the Arts (MITA) to regulate and promote the broadcasting industry and new broadcasting technologies such as Digital Audio Broadcasting (DAB) and Digital Television. On 1 Jan 2003, the merger of the Singapore Broadcasting Authority, the Films and Publications Department, and the Singapore Film Commission (SFC) saw the formation of the Media Development Authority (MDA). The MDA has been created to focus on and develop the media industry, putting Singapore at the front of the media age and respond to the unification of different media that requires a consistent approach in developing and managing the different forms of media. ...read more.