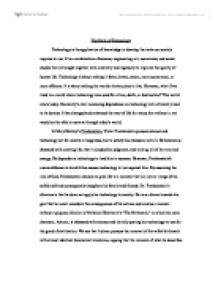 The Evils of Technology

The Evils of Technology Technology is the application of knowledge to develop the tools our society requires to run. It is a combination of science, engineering, art, economics, and social studies that is brought together with creativity and ingenuity to improve the quality of human life. Technology is about making it faster, better, easier, more economical, or more efficient. It is about making the world a better place to live. However, what if we lived in a world where technology was used for crime, death, or destruction? This world exists today. Humanity's ever increasing dependence on technology will ultimately lead to its demise. It has changed and enhanced the way of life for many, but without it, we would not be able to survive through today's world. In Mary Shelley's Frankenstein, Victor Frankenstein pursues science and technology not for wealth or happiness, but to satisfy his obsession with it. ...read more.

will restore the perfect physical beauty of his wife. Akin to Frankenstein, Aylmer was so confident in his technology that "he felt he could draw a magic circle round her, within which no evil might intrude." (162) In Dr. Strangelove, Kubrick must also be making a comment on communication technologies, as the natural difficulty of the communication process is being demonstrated in almost every scene. Much of the dialog takes place over the telephone or radio and the major conflicts center around the miscommunication of both. In chronological order, Ripper's initial request to have Mandrake issue the "go code" to the bomb wing takes place over the phone. Then, Ripper orders the entire base to impound all radios, as they might be used to issue information to the enemy. The attack plan is then radioed to the planes, which are already holding at their fail safe points. ...read more.

The message in these Kubrick films is simple: the dehumanization of human beings by the modern, automated world is escalating. The biggest problem with technology, which can eventually lead to the downfall of humanity, is people. It seems that our technology has surpassed our ethical capacity. Since technology can give an individual a massive amount of power, and the ability to inflict catastrophic amounts of damage, the consequences for people's actions are greater. In Shelley's Frankenstein, Hawthorne's "The Birthmark," and Kubrick's 2001: A Space Odyssey and Dr. Strangelove, we meet with scientists, astronauts, and military personnel who are negatively affected by the technologies they have created. In each of these stories a different type of technology is revealed: bio technology, chemical technology, computer technology, and weapons technology. Today our technology seems to have outstripped our means to control it in so many areas that one could just as easily imagine a genetic, medical, environmental, or technological apocalypse. ...read more.