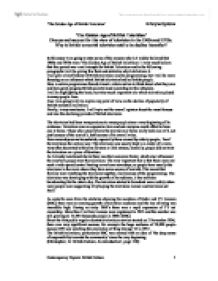 'The Golden Age of British Television'Discuss and account for this view of television in the 1960s and 1970s. Why is British terrestrial television said to be decline thereafter?

'The Golden Age of British Television' Discuss and account for this view of television in the 1960s and 1970s. Why is British terrestrial television said to be decline thereafter? In this essay I am going to state some of the reasons why is it widely believed that 1960s and 1970s were 'The Golden Age of British Television'. I very much believe that this period was a real triumph for British Television and in the following paragraphs I will be giving few facts and statistics why I do believe it. I will give a brief history of British television and its programming, but I will be more focusing on an influence which British television had on British people. How a certain programmes forced almost a whole nation to think about what they saw and how great progress British society made according to this influence. I will be highlighting the basic, but very much important role which television played in many people lives. Also I am going to try to explain my point of view on the decline of popularity of British terrestrial television. Finally, in my conclusion, I will try to set the overall opinion about the most famous and also the declining periods of British television. ...read more.

People trust to what they have been shown, 'Cathy come home' was not the only film which led to the parliamentary debate, for instance 'Up the Junction' (by Nell Dunn) showing the terrifying reality of an illegal abortion achieve the same goal. The BBC's monopoly holds the British nation traditions as well as brought many great changes. The television audience was growing larger and larger, but during the late 1960s there was a very important breaking point and it was on 22 September 1955 when ITV broadcasting was introduced to the public. The ITV broadcasting brought lots of changes to the traditional programmes produced by the BBC. Although there were popular entertaining series made by BBC already, for example - the most popular police drama 'Dixon of the Dock Green'; 1955-76, ITV bring a new, fresh air to the British television programming. First and the most striking success made by ITV was the introduction of 'Coronation Street' the most successful soap opera. 'Fifteen to twenty million people of all the different ages in all the parts of the country regularly watched it.' (Christopher, D.: British Culture; An introduction', page: 113) ...read more.

Because of BBC independence on the advertising, it could have achieved these great goals without problems. They did not have to be bothered with competition and they do not have to fight for the people's attention. It was a perfect atmosphere for creating such a valuable programmes and producing such magnificent films. I am not really sure if people of those days really appreciate what they have, because they did not really have anything to compare with, but I think that they still knew what did TV brought to them. How it formed their values and how many good things happened because of that impulse television gave to them. I feel the necessity to mention that despite of the actual decline, despite of the fact that it lost its strong position almost completely, BBC is still trying to hold the classical, television 'upper-class' tradition. 'The Golden Age' will probably never come back, but I see this as a great attitude and something very valuable. For some people British terrestrial television means a lot, and that is what counts. ?? ?? ?? ?? 'The Golden Age of British Television' Kristyna Syslova 1 Contemporary Popular British Culture ...read more.