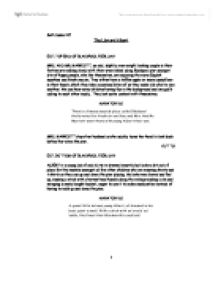 The Lion and Albert.

Beth Dakin 12F The Lion and Albert EXT. TOP END OF BLACKPOOL PIER. DAY MRS. AND MR. MARRIOTT, an odd, slightly over weight looking couple in their forties are walking slowly with their arms linked along Blackpool pier amongst lots of happy people, who like themselves, are enjoying the warm English sunshine and fresh sea air. They either have a toffee apple or some candyfloss in their hands, which they take occasional bites of as they make idle chat to one another. We can hear noisy children having fun in the background and sea gull's calling to each other loudly. They look quite content with themselves. NARATOR V.O MRS. MARRIOTT stops her husband as she quickly turns her head to look back behind her down the pier. CUT TO: EXT. BOTTOM OF BLACKPOOL PIER. DAY ALBERT is a young lad of only 8. He is dressed smartly but looks a bit out of place for the seaside amongst all the other children who are wearing shorts and t-shirts as they run up and down the pier playing. He looks very bored and fed up, running a stick with a horses head handle along the railings making a din and swinging a newly bought bucket, eager to use it to make sandcastles instead of having to walk up and down the pier. ...read more.

When Mrs Marriott looks round at her son we will see him through her eyes because it will show the audience how she perceives him and the impression that he gives her instead of the audience having their own view of him. When Mrs. Marriott is talking she will be shot slightly from below at a low angle shot because she is very bossy and headstrong and likes to control the family. It will make her look intimidating to the audience and they are meant to feel as if she is bossing them around too. Mr. Marriott on the other hand is totally opposite to his wife. Whenever they have a conversation he will always be looked onto from a high angle shot to make him look smaller and belittled by Mrs. Marriot. Albert and his father have a much better relationship where they can actually look at each other in the eye because they are both in the same position under Mrs. Marriotts control and therefore have a connection. Evaluation In this film I have tried to use a humorous style that will appeal to children and adults. One way of doing this was through visible humour; I purposefully put the Marriotts in odd clothes that may be perfectly fine for the time but are now considered very out of date and amusing to a modern audience. ...read more.

of the film and if it is a good opening that will catch the audience they will want to see the film through. I lastly think that this film is typical of cinematic thinking. I have used ideas that I know form other films or have picked up along the way because this is my first ever go at doing a screen play. I was not over confident about what I was doing so I stuck to familiarity to make it easier. Now I have mope confidence with it and understand the process and how to go about it I would definitely try and be more creative with my cinematic ideas and make the film that little bit more different and edgy. In conclusion I think that there could be some aspects of my work that I could work on like making it more adult friendly and try to catch the audiences attention more in the opening scenes because it would make it more entertaining. I would also try to experiment more with cinematic ideas and make my work more original. I feel though that I have produced a good screenplay that does all that it is asked to do but could do with a little bit more to make it more interesting. 1 ...read more.