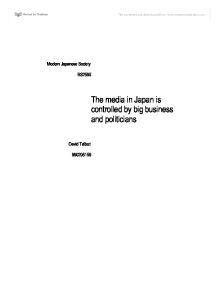 Modern Japanese Society BS2595 The media in Japan is controlled by big business and politicians David Talbott 990205159 When asked to name world's best selling newspaper very few people outside of Japan would be able to give the correct answer, namely that of the Yomiuri Shimbun, which is printed almost 15 million times each day. Even its closest rival, Asahi Shimbun, which sells around 12.5 millions copies a day completely eclipses the 3.3 million circulation of The Sun, Britain's most popular daily newspaper. The Japanese newspaper market is in fact huge: the average Japanese household receives 1.2 papers per day, almost one and a half times more than in the UK. The TV market is similar in size. Over 6 in 10 households own a television and the average Japanese person watches four hours of TV a day. Given the size of the market and in light of the important role the media is expected to play in a modern society, it is disturbing to note that the Japanese media is consistently criticised in studies by western scholars. It is often charged with delivering a standardised product that limits customer choice. Some critics attack the system even more vociferously stating that journalists and politicians collude to form "information cartels" that serve to "the creation of an informationally inferior product where the people do not get 'all the news that's fit to print'" (Freeman, 2000:178). However, in spite of all these criticisms the Japanese place more trust in NHK, Japan's public broadcasting organisation, than in any other major institution in Japan, ranking it higher than the Diet or the government in general. ...read more.

Ban journalists exemplify this quandary. Compared to western journalistic standards, the close relationships they form with politicians have allowed them in the past to gain unprecedented access to the inner sanctums of government and have in some instances resulted in information that if published would have amounted to a scandal. This is however the disadvantage of having such close ties with the politician one ought to be critically reporting on; the fact that journalists cultivate such friendly relationships means that it becomes harder for them to write negative stories. This raises concerns of morality and journalistic responsibility that are relevant in other situations. Kisha clubs are not simply institutions in which press conferences are held and briefings handed out; as is the case with ban journalists, most reporters who are members of a kisha club spend more time in their club surrounded by journalists from rival publications than they do at their own news company. This has led to the second problem that affects the press' ability to function independently. The disproportionately high amount of time that is spent with rival journalists in the club often results in reporters identifying more with their club and fellow (rival) club members than with their colleagues. Strong ties amongst club journalists are increased by the large number of social events organised by the club. Depending on what organisation the club is attached to, journalists will be invited to banquets, golf games or may for example have to accompany a politician on a tour where reporters are frequently housed in expensive hotels. ...read more.

Media ownership is quite different in other countries but has, especially in the recent past, attracted more and more attention as the focus has shifted to how media business agendas might affect how news is reported. In the UK the national press has been dominated by four companies at least since the mid 1950s. Other papers make up only around 15% of the market (Sparks, 1995). These four have diversified into other media markets and now own shares in television and radio stations. However, the power these media companies wield pales in comparison to some of the new multi-national conglomerates that are present in numerous markets. These companies use their shear size and control over news dissemination channels to influence politics and more frighteningly influence the public. Rupert Murdoch's now infamous News Corporation, one of the biggest media companies in the world is often charged with placing business principles ahead of journalistic values, in placating China for example (Ashley, 2001). This behaviour of media companies actively trying to shape government policy is almost non-existent in Japan. In contrast the Japanese media seems somewhat lethargic, having grown comfortable with the existing structure. Government agencies and corporate enterprises have learned to play the big five media groups against one another and now exercise tremendous control over the media primarily through the kisha clubs. Paradoxically the press are often given all the facts and have complete access to the news but for various reasons choose not to live up to their role as the "Fourth Estate" and inform the public, but instead chose to engage in self-censorship and leave society in the dark. ...read more.