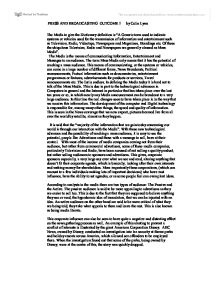 The Media to give the Dictionary definition is &quot;A Generic term used to indicate systems or vehicles used for the transmission of information and entertainment such as Television, Radio, Videotape, Newspapers and Magazines, Hoardings etc.

The Media to give the Dictionary definition is "A Generic term used to indicate systems or vehicles used for the transmission of information and entertainment such as Television, Radio, Videotape, Newspapers and Magazines, Hoardings etc. Of these the ubiquitous Television, Radio and Newspapers are generally classed as Mass Media". The Media is the means of communicating Information, Entertainment and Messages to an audience. The term Mass Media only means that it has the potential of reaching a mass audience. This means of communicating, or the systems or vehicles, can come in a large number of different forms, News Broadcasts, Political announcements, Factual information such as documentaries, entertainment programmes or features, advertisements for products or services, Travel announcements etc. The list is endless. In defining the Media today it is hard not to talk of the Mass Media. ...read more.

With most of the income of media companies coming not from their audience, but rather from commercial advertisers, some of these media companies, particularly Television and Radio, have been accused of not selling a quality product, but rather selling audiences to sponsors and advertisers. This gives, corporate sponsors especially, a very large say over what we see and read, altering anything that doesn't fit their corporate agenda, which is basically, looking after their own interests and making money for shareholders. More importantly these corporations, (which can amount to a few individuals making lots of important decisions) who have vast influence, have the ability to set agendas, or as some people feel can even plant ideas. According to analysts in the media there are two types of audience: The Passive and the Active. The passive audience is said to be more appealing to advertisers as they are easier to sell too. ...read more.

The result of this concentration of ownership in the hands of a few individuals leads to a real lack of diversity of opinion and puts great power in the hands of a few companies and individuals. In Britain this is still not as bad as it is in the US. Government regulations mean that there is a level of control over any company or individual having too much power. This though could all change very shortly after the Governments recent announcement that they were considering deregulating the media industry. This would allow giant media groups like Disney, Viacom and News Corporation to buy into British Television for the first time. The Campaign For Press and Broadcasting Freedom believes that this threatens to "Put our media at the mercy of the market and will transform British Broadcasting into an ultra commercial, American style". PRESS AND BROADCASTING OUTCOME 1 by Colin Lynn ...read more.