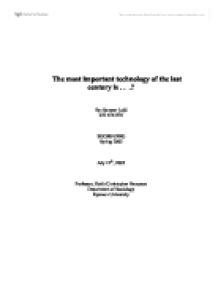 The most important technology of the last century is . . .?

The most important technology of the last century is . . .? By: Sameer Lalji 022 676 878 SOC880 (9B0) Spring 2005 July 12th, 2005 Professor, Keith Christopher Hampson Department of Sociology Ryerson University When humans observe their current surroundings, it becomes overtly clear that our civilization has evolved to the highest degree. Where humans once held a stone tablet and a chisel, they now grasp a keyboard, instead of burning scrap piles of wood, they use microwave radiation for heat, and the automobile has substituted most, if not all, primitive forms of transportation. All of these life altering and advancing inventions mentioned only hint at the marvels of the modern world. These affluent creations that help construct a tranquil, comfortable and often longer life for human beings are habitually taken for granted. Rebecca Einarson, a woman who at the time of her interview was 102 years old and lived in 3 different centuries claims that "...technology is moving so fast it's making my head spin1." Amidst all of this chaos and "head spinning" the appreciation of technology becomes an arduous task. Society today seems to view technology in an optimistic way and a pessimistic way, both at the same time. ...read more.

Following the discovery of transistors, silicon semi-conductors and a countless number of other discoveries, the computer eventually arose. The computer is a masterpiece comprised of several components in an awe inspiring formation. Given its incredible past it would seem that the computer has achieved all that is possible. On the contrary, with the current studies of quantum computing and artificial intelligence, it seems that the future of computers is almost limitless. These new quantum computing studies will make it possible for computers to function at speeds that were previously thought to be unattainable5. Plus, the research into artificial intelligence may bequeath computers with the power to mimic human thinking and accomplish the task of self-awareness6. On the negative side, all of this makes a Matrix like world seem not too fictitious. These ideas are so profound that they may one day redefine the meaning of life itself. In addition, small glimpses into the world of computers, makes it quickly apparent that they have significantly influenced numerous societies. In its most predominant roles a computer is responsible for making a heart beat, cloning a human, adding numbers, guiding planes, predicting weather, performing surgeries, record keeping and a truly remarkable deal more7. ...read more.

However, this conjecture is somewhat flawed. In essence, the relationship between a computer and the internet is fundamentally the same as the relationship between the single wheel and four wheels coupled together with an axel and a rod. The internet is merely a network of several computers attached by cables. Ergo, the two technologies are not just similar but mutually in a symbiotic relationship. The computer (through the internet) is capable of so much more than anyone ever expected. Together, they allow humans to communicate in a manner never thought possible. It allows: relationships to form between two strangers, a single message to be sent out to the mass media, communication to exceed all previous boundaries, and a great deal more. This addition of the two, unquestionably presents the computer as the most vital, influential and notable technological advancement of the last century. Although credit must be given to the individual parts that create the computer, it is the harmony and co-existence of these parts to form a whole that is truly phenomenal. Lest not forget the fact that some people consider the word computer to mean the same thing as the word technology10. Examining all of this evidence presented, it becomes overwhelmingly obvious that the computer, with all of its involvement and ability to improve the world makes it the single most important technological advancement of the last century. ...read more.