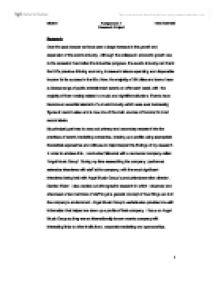 Research Over the past decade we have seen a large increase in the growth and expansion of the events industry. Although the collapse in economic growth due to the recession has halted the industries progress, the events industry can thank the UK's previous thriving economy, increase in leisure spending and disposable income for its success in the 90s. Now, the majority of UK cities and towns have a diverse range of public entertainment events on offer each week, with the majority of them notably related to music and nightlife institutions. Events have become an essential element of a music industry which sees ever decreasing figures in record sales and is now one of the main sources of income for most record labels. My principal goal was to carry out primary and secondary research into the practises of events marketing companies, drawing up a profile using appropriate theoretical approaches and critiques to help interpret the findings of my research. In order to address this, I conducted fieldwork with a renowned company called 'Angel Music Group'. During my time researching the company I performed extensive interviews with staff at the company, with the most significant interviews being held with Angel Music Group's production/promotion director, Damian Eston. I also carried out ethnographic research in which I observed and shadowed a few members of staff to get a general concept of how things work in the company's environment. Angel Music Group's website also provided me with information that helped me draw up a profile of their company. I focus on Angel Music Group as they are an internationally known events company with interesting links to other institutions, corporate marketing and sponsorships. Angel Music Group Since Angel Music Groups origins in 1998, they have played a leading role within the music events industry and have developed into one of the most successful international companies of their kind. Angel Music Group has shown broad business interests and knowledge in areas such as; event marketing and promotion, festival and arena events, venue ownership, consulting and licensing, interactive design and talent booking. ...read more.

explains, the irony is that the compilation album is a commodity which is looked down upon in the dance world, because of the high prestige attached to the obscurity within such subcultures. Such compilations have the least credibility amongst dance crowds, whereas 'white labels' have in the past has the highest (Thornton, 1994, p. 179). This can lead to a loss in cultural capital which will affect the company in the future. It constantly seems like Angel Music Group are abandoning the cultural aspects for economic capital. However, on a more local scale this is balanced out as Angel Music Group holds many smaller scale events on a weekly basis outside of their 'Godskitchen' and 'Global Gathering' brands. All of these events are carried out not only in 'Air' nightclub but other venues such as the 'Custard Factory' and the 'Rainbow', which are all situated in the cultural sector of Birmingham. This gives the company more credibility on a local scale as they do not hold events in 'commercial' clubs situated in the city centre. Conclusion It's clear to see that Angel Music Group is a successful company that is constantly looking to expand. However, this may have adverse effects on the market and on their cultural capital as I described previously. There is a compromise you have to make between economic capital and cultural capital as it seems the gain in one leads to the fall in the other and visa versa. Although Angel Music Group and their brands have managed to retain their cultural credibility on a local scale, it seems as if their drive to constantly expand on an international scale is seeing them take their brands and dance music as a whole into the mainstream. However, dance music fans may not completely look at this in a bad light as Angel Music Group are not taking dance music and physically 'commercialising' it as some major record companies would do, but instead taking the same 'underground' dance music and bringing it to audiences in the market all over the world thus still retaining some sense of credibility. ...read more.