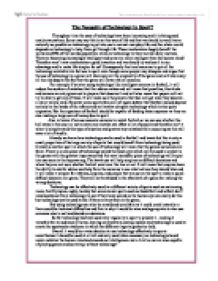 The Necessity of Technology in Sport

The Necessity of Technology in Sport? Throughout time the uses of technology have been increasing and it is being used nearly everywhere. Some may say this is not the way of life and that we should try and live as naturally as possible as technology is put into use in normal everyday life, and the whole world depends on technology to help them get through life. These mechanisms hugely benefit the world and 95% of the worlds population relies on technology in there normal daily routines. They are becoming increasingly intelligent and some are more intelligent than the human mind! Therefore aren't new mechanisms a good invention and we should try and use it to our advantage and to make life simpler for us? Consequently the time has come to put all the technology available into full use in sport even though some people may disagree and argue that the use of technology in a game will take away all the originality of the game and will take away all the risk despite the fact that the game will have a fairer outcome. ...read more.

The hawk eye will help umpires on difficult decisions and when they are not sure whether the ball went over the line or not. It will mean that umpires have the ability to ask for advice and help from the cameras to see what actions they should take and it will make it simpler for referees, umpires, and people that are put on the spot to make a quick difficult decision in a game. They will not be abused in the aftermath of a game for making the wrong decisions. Technology can be effectively used in a different variety of sports such as swimming, races, the Olympics, rugby, hockey but some slower sports such as basketball and netball don't need assistance from technology to see if they have scored as the human eye can easily do this but technology can be used to see if there are any fouls in the game. But using technology can also be considered unreliable as it could crash instantly or there could be technical difficulties and this is why it would be wise and appropriate to also use someone else to call and decide on decisions. ...read more.

Hawk-Eye tracks a ball's trajectory via cameras and will allow umpires to refer to instant replays on disputed line calls at the tournament in Perth. The technology will also be used at the seniors' Champions Tour's season-ending event, which starts Tuesday in London. Tennis' ruling body the ITF has been testing several systems - including Hawk-Eye - for some time in a bid to end controversial rulings over disputed line calls. But trials ahead of this year's US Open showed the technology still lacked reliability. However, ITF officials feel that issue was resolved in the latest round of testing and the move to install it at the Hopman Cup has the backing of tournament director Paul McNamee. "The sport is ready for this innovation, and we're confident Hawk-Eye is ready too," said McNamee. Large video screens at the end of the courts in Perth will display the outcome of disputed line calls direct to the spectators at the stadium. The ATP and WTA Tours are now looking into which tournaments might use electronic line-calling and the specifics of what the rules will be in the future. ...read more.