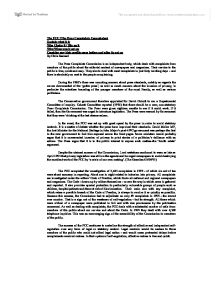 The PCC (The Press Complaints Commission) - Explain what it is

The PCC (The Press Complaints Commission) Explain what it is Who Chairs it / Sits on it Why/When was it set up Consider any high profile cases before and after its set up By Chris Barnard The Press Complaints Commission is an independent body, which deals with complaints from members of the public about the editorial content of newspapers and magazines. Their service to the public is free, quick and easy. They aim to deal with most complaints in just forty working days - and there is absolutely no cost to the people complaining. During the 1980's there was mounting concern about press standards, notably as regards the moves downmarket of the 'gutter press', as well as much concern about the invasion of privacy, in particular the relentless hounding of the younger members of the royal Family, as well as various politicians. The Conservative government therefore appointed Sir David Calcutt to run a Departmental Committee of enquiry. Calcutt Committee reported (1990) that there should be a new, non-statutory Press Complaints Commission. The Press were given eighteen months to see if it could work. ...read more.

That is a sign not of the weakness of self-regulation - but its strength. All those which were critical of a newspaper were published in full and with due prominence by the publication concerned. As well as dealing with complaints, the PCC deals with a substantial number of calls from members of the public about our service and about the Code. In 1999 they dealt with over 4,500 telephone inquiries. This was an encouraging sign of the accessibility of the Commission to members of the public. The success of the PCC continues to underline the strength of effective and independent self-regulation over any form of legal or statutory control. Legal controls would be useless to those members of the public who could not afford legal action - and would mean protracted delays before complainants received redress. In their system of self-regulation, effective redress is free and quick. The Right Hon Lord Wakeham FCA, JP is the chairman of the PCC. He was Lord Privy Seal and Leader of the House of Lords from 1992 to 1994. He was the Secretary of State for Energy from 1989 to 1992, Lord President of the Council and Leader of the House of Commons 1988-9, and finally Lord Privy Seal and Leader of the House of Commons 1987-8 Government Chief Whip 1983-7. ...read more.

Magazine Complaint: The publication of photographs taken of the prince in Chile during his gap year despite the PCC's ruling in the wake of Princess Diana's death. The editor argued that the jungles of Chile were a public place and thus the photos were not taken as a result of persistent pursuit. Verdict: Upheld. The PCC deemed that Prince William was not in a place where photographers would normally have been and must, therefore, have been followed there by foreign paparazzi. 2000: Prince of Wales v the Sunday Times Complaint: Prince Charles took the unprecedented step of objecting to a story after the newspaper claimed that he planned to marry Camilla Parker Bowles. The offending article claimed that he and Mrs Parker Bowles were in secret discussions with the Church of Scotland about a possible wedding in Scotland. The Church of Scotland permitted divorcees to marry in church. Verdict: After an intervention from the PCC, the Sunday Times climbed down and printed a correction and page 2 apology. The paper said: "The story was based on information from a source close to the Church of Scotland. Following assurances from St James's Palace that there was no foundation to this story, we acknowledge that the story was inaccurate and are happy to set the record straight. We apologise for the error." ...read more.