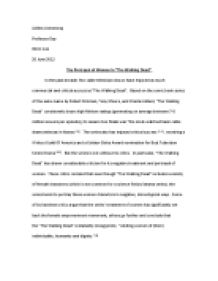 The Portrayal of Women in The Walking Dead TV Show.

﻿Ashley Armstrong Professor Day HSOC 141 28 June 2012 The Portrayal of Women in ?The Walking Dead? In the past decade, few cable television shows have enjoyed as much commercial and critical success as ?The Walking Dead?. Based on the comic book series of the same name by Robert Kirkman, Tony Moore, and Charlie Adlard, ?The Walking Dead? consistently draws high Nielsen ratings (generating on average between 7-8 million viewers per episode); its season two finale was ?the most-watched basic cable drama telecast in history?[1]. The series also has enjoyed critical success [2, 3], receiving a Writers Guild Of America and a Golden Globe Award nomination for Best Television Series Drama [4,5]. But the series is not without its critics. In particular, ?The Walking Dead? has drawn considerable criticism for its negative treatment and portrayal of women. These critics contend that even though ?The Walking Dead? includes a variety of female characters (which is not common for a science fiction/drama series), the series tends to portray these women characters in negative, stereotypical ways. Some of its harshest critics argue that the series? treatment of women has significantly set back the female empowerment movement; others go further and conclude that the ?The Walking Dead? is blatantly misogynistic, ?robbing women of (their) individuality, humanity and dignity.?[6] In this paper, I will examine how the writers of ?The Walking Dead? have elected to portray its four female lead characters -- Lori, Andrea, Maggie, and Carol. I will discuss specific scenes involving these four female characters. I will show that the critics of ?The Walking Dead? are correct. The writers (so far, at least) have elected to depict these four female characters in historically negative fashion. Apparently, the writers of ?The Walking Dead? seem to believe women are: (1) hysterical by nature; (2) emotionally immature; and (3) burden with a complete inability to cope with grief. The Stereotypical Hysterical, Irrational Female Gary Nunn, in his article ?The Feminisation of Madness is Crazy? he explores the origin of ...read more.

In the end, viewers sympathize with Dale while concluding that Andrea is selfish and cruel. Andrea?s immaturity isn?t limited to her interactions with Dale. When Andrea expresses a desire to learn how to properly shoot a gun, she begins taking lessons (from a man, of course). But Andrea isn?t a quick student. In fact, the writers portray Andrea as clumsy with guns. In one specific case, a bloody and injured Daryl (a productive man) walks out of the forest and Andrea mistakenly believes that he is a zombie. When she decides to shoot him, Dale warns her to wait until the zombie is more visible, but she is too immature to listen. Instead, Andrea shoots Daryl, nearly killing him. Another immature female character is Maggie Greene, Hershel?s eldest daughter. The writers of ?The Walking Dead? initially treat Maggie favorably by having her serve as one of her father?s most important helpers. But even though her character is initially treated favorably, the writers soon turn Maggie into just another immature woman. And, once again, these writers illustrate Maggie?s character flaw by contrasting them against a man?s strengths. This time, the writers use Glenn, a young, humorous Asian boy who serves as the group?s go-to scout. The Maggie-Glenn relationship differs somewhat from the other male-female relationships in the series in one critical way: Maggie does not seem to rely on Glenn. In fact, Maggie saves his life on a number of occasions, and Glenn is attracted to her many skills. However, Glenn and Maggie?s relationship suffers from its fair share of conflict and reaches two main hitches. Glenn and Maggie?s first disagreement occurs when Glenn reveals an important secret about Hershel to the group. Maggie feels betrayed by Glenn. However, instead of handling this conflict in a mature fashion, the writers cause Maggie to behave very immaturely. Like a child, Maggie literally ignores Glenn for quite some time, refusing to even look at him. ...read more.

Additionally, all of the women are shown ?giving up? and quitting at one point or another over the course of the series. Even Maggie, who is made out to be one of the strongest most capable women, suffers a breakdown during the final zombie battle and survives only with Glenn?s assistance. Shane, Rick, and Daryl suffer similar character trials, but none of them every throw up their hands and give up completely. This seems to be a reaction reserved for female roles. Overall, these generalizations are in line with many assumptions that males hold about women, and further the perception that although women may occasionally show signs of strength, they are not consistently stable enough to weather long periods of conflict and stress. Second, ?The Walking Dead? asserts that the main obstacle facing women today are females themselves. The women in the series have a very difficult time interacting and getting along with each other. Andrea faces constant disapproval from Lori on her attempts to better herself, and most of the female camp members seem to shun Maggie, viewing and treating her as an outsider. To me, this is a sneaky, yet very damaging way of undermining female power. Asserting that women are the ones who are limiting themselves, men absolve themselves of any responsibility. The majority of anti-feminist events in ?The Walking Dead? occur without the influence of men and the blame is instead placed on the shoulders of the females. Notwithstanding the disappointment I?ve felt in seeing how the writers of ?The Walking Dead? have chosen to portray women, I remain somewhat hopeful that they will reverse course. The very last scenes of Season 2 revealed a hooded character wielding a katana and leading two armless zombies. Although this is not revealed explicitly to the audience, this character is Michonne, a female warrior who is quite popular within the comic book series [9]. I am hopeful that in introducing Michonne, the writers will use her as a catalyst for a more reasonable and positive portrayal of women in the series. ...read more.