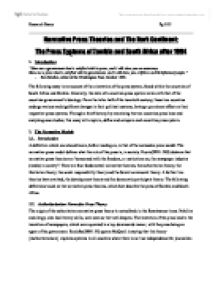 The Press Systems of Zambia and South Africa after 1994.

Normative Press Theories and The Dark Continent: The Press Systems of Zambia and South Africa after 1994 1. Introduction "Show me a government that is satisfied with its press, and I will show you an autocracy. Show me a press that is satisfied with its government, and I will show you a lifeless and ill-informed people." * Ben Bradlee, editor of the Washington Post, October 1996. The following essay is an account of the orientation of the press system, found within the countries of South Africa and Zambia. Generally, the state of a countries press system varies with that of the countries government's ideology. From the latter half of the twentieth century; these two countries undergo various and significant changes in their political systems, having a prominent effect on their respective press systems. Through a brief history; by examining the two countries press laws and analysing case studies; this essay will explore, define and compare each countries press system. 2. The Normative Models 2.1. Introduction A definition which one should know, before reading on, is that of the normative press model. The normative press model defines what the role of the press is, in society. Fourie(2001: 269) declares that normative press theories are "concerned with the freedom, or restrictions on, the newspaper industry (media) in society". There are four fundamental normative theories; the authoritarian theory, the libertarian theory, the social responsibility theory and the Soviet communist theory. A further two theories have evolved; the development theory and the democratic-participant theory. The following definitions touch on the normative press theories, which best describe the press of Zambia and South Africa. 2.2. Authoritarianism Normative Press Theory The origin of the authoritarian normative press theory is rooted back in the Renaissance times. Nobility and clergy, who had literary skills, were seen as the truth keepers. The invention of the press lead to the invention of newspapers, which were operated in a top-downwards manor, with the press being an agent of the government. ...read more.

" Although this right omits the ideas of impartiality and diversity, it does explicitly guarantee the freedom of expression, by specifically referring to "freedom of the press". Section 32: Access to Information This section makes South Africa one of the very few countries in the world which, at the constitutional level, that provides for a free-standing, albeit not absolute, right of access to government information; "32. (1) Everyone has the right of access to a. any information held by the state; and b. any information that is held by another person and that is required for the exercise or protection of any rights. (2) National legislation must be enacted to give effect to this right, and may provide for reasonable measures to alleviate the administrative and financial burden on the state". Section 36: The Limitation of Rights "36. (1) The rights in the Bill of Rights may be limited only in terms of law of general application to the extent that the limitation is reasonable and justifiable in an open and democratic society based on human dignity, equality and freedom, taking into account all relevant factors, including a. the nature of the right; b. the importance of the purpose of the limitation; c. the nature and extent of the limitation; d. the relation between the limitation and its purpose; and e. less restrictive means to achieve the purpose. (2) Except as provided in subsection (1) or in any other provision of the Constitution, no law may limit any right entrenched in the Bill of Rights. " This right provides for derogation from the Bill of Rights in the event that a state of emergency be declared. But such derogation is permitted only in closely defined circumstances, to the extent that the derogation is strictly required by the emergency and the relevant legislation is consistent with South Africa's obligations under international law. A further technicality is that the derogation is limited to certain rights and these rights only, while not affecting others. ...read more.

The Open Democracy Bill attempts to increase public participation in administration and governance, so moving beyond representative democracy to participatory democracy. It aims to promote open and accountable administration at all levels of government and, more specifically, to enable individuals to effectively scrutinize and participate in governmental decision-making on issues which affect them. It proposes four main changes to the law and provides several enforcement mechanisms. * Right of access by any person to information held by the government, subject to a certain exemptions * The use and disclosure of personal information held by both governmental and private bodies without the consent of the individual * Meetings of governing bodies of organs of government be open to the public. * Provides protection against civil and criminal liability for "whistleblowers". Freedom of Expression Institute's website. 1997. Available at http://fxi.org.za/press/1997/denel.htm. 12 April 2003. -- These changes allow for further participatory action in the democratic South Africa, with special focus on multiplicity and diversity of media; small scale us if media; local nature of media and the interaction and involvement of minorities in the media field. 5.4. Conclusion From the correlation of the case studies and press laws of both countries, one is able to deductively define each country's press system according to the normative press theories. Zambia for example has totalitarianistic laws, which advocates absolute power to the government and therefore adopts the corresponding authoritarian normative press system. South Africa on the other hand, is a democracy - it does allow for extensive freedom of expression, but it is up to the people to participate and take control of the media, hence it has adopted the democratic-participant normative press theory. 6. Conclusion The analysis of these two countries, their backgrounds, press laws and case studies have left me with this conclusion; a country's press system is a reflection of it's political system. In my opinion this statement holds true. Before people can change the way they see and hear, they must decide on the way they think. Research Essay Pg 1/15 ___________________________________________________________________________________ ...read more.