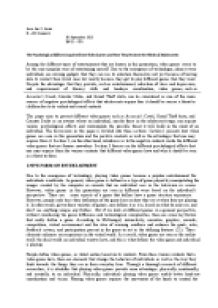 ï»¿Jesse Jan S. Javier II – BS Comtech 30 September 2013 EN12 – S01 The Psychological Effects Acquired from Video Games and How They Weaken the Minds of Adolescents Among the different types of entertainment that are known in this generation, video games seems to be the most popular way of entertaining oneself. Due to the emergence of technology, almost every individuals are owning gadgets that they can use to entertain themselves not just because of having able to contact their loved ones but mostly because they got to play different games that they want. Despite the advantages that they provide, such as entertainment, reduction of stress and depression, and improvement of literacy skills and hand­eye coordination, video games, such as Assassin’s Creed, Counter Strike, and Grand Theft Auto, can be considered as one of the main sources of negative psychological effects that adolescents acquire thus it should be seen as a threat to children due to its violent and sexual contents. This paper aims to present different video games such as Assassin’s Creed, Grand Theft Auto, and Counter Strike as an avenue where an individual, mostly those in the adolescent stage, can acquire various psychological effects and contemplate the possible threat it will build in the mind of an individual. The discussions in this paper is divided into three sections. Section 1 presents how video games are seen in this generation and the positive contents as well as the advantages that one may acquire from it. Section 2, on the other hand, introduces us to the negative contents inside the different video games that are famous nowadays. ...read more.

2 DESTRUCTIVE Though video games contain positive elements, its counterpart, the negative contents, also exists to maintain the so-called balance on the game itself. Violence, such as murder, burning, assault, threat, and stabbing, is always present in almost all video games nowadays. Video games also present some sexual acts, such as forced sexual intercourse, kissing, grabbing and fondling private parts, and showing private parts of the body, wherein an individual can gain awareness from. Cursing, criticism, intimidation, and using words that are not appropriate for young individuals are also present in video games in this generation because doing those acts has already become very entertaining for most individuals. Indeed, many children nowadays are addicted to video games particularly on violent ones such as Grand Theft Auto and Assassin?s Creed. In the book Growing Up Fast and Furious: Reviewing the Impacts of Violent and Sexualised Media on Children, it is presented that ?Violent video games are much more repetitive than other forms of violent media and more often involve the repetition of complete behavioural sequences (Gentile et al, 2007). Players repeat the same behaviours and receive similar rewards throughout the game, experience similar thoughts and feelings during those actions and are exposed to the attitudes espoused in the game implicitly and explicitly (for example, sleeping with prostitutes and then murdering them to retrieve one?s money in GTA implies misogyny, the acceptance of violence to get what one wants and that human life has little value)? (Anderson and Warburton, 71). Based on the passage, one can say that reward and punishment is present in video games and this encourages the players to patronize the game even more. ...read more.

This simply means that because of the high level of competency promoted among children on the game, they are most likely to gain it in reality thus they became more aggressive in their actions towards other people. Of course cooperation is very much different from competition. Sometimes, competition is also present among social groups but as what Anderson and Morrow suggested, this competitiveness does not ignore the previous relationships among the people involved. Lastly, shooting cases in some countries are said to be the effect of the games that an individual plays. In the thesis The Effects of Violent Video Games on Aggressive Behavior and the Relationship to School Shootings, American Academy of Child & Adolescent Psychiatry (AACAP) states that excessive playing of video games that has contents that are contrary to the social norms expected in the society can lead to problems that can affect how an individual behave in his surroundings. However, it does not only affect one?s behavior rather it also affect how people interact with the people around him ? family, friends, and relatives ? and it also changes the way an individual make use of his free time, probably for sports or other physical activities. AACAP also talks about how addiction to video games, spending most of their time playing, can lead to attention problems (Bond, 5). Video games actually provide certain problems and benefits but children acquire these psychological problems from video games because of excessive exposure and poor capability to set priorities in everything they do. Given these psychological problems one acquire from video game contents, it must already be seen as a threat to children?s way of living. ...read more.