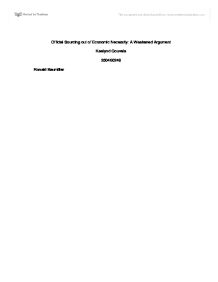 The purpose of this paper is to illustrate that Chomskys claim that the mass-media rely on official government and corporate sources out of economic necessity is weak and no longer valid in present-day; this weakness does not necessarily result in the

Official Sourcing out of Economic Necessity: A Weakened Argument Kaelynd Gouveia 250460248 Ronald Baumiller The purpose of this paper is to illustrate that Chomsky's claim that the mass-media rely on official government and corporate sources out of economic necessity is weak and no longer valid in present-day; this weakness does not necessarily result in the negation of the entire propaganda model or the third filter of the model wherein the argument lies. I will first explain Chomsky's propaganda model, its purpose, and how it is structured to work. I will then explain Chomsky's reasoning as to why the mass-media and producers of official sources engage in close symbiotic relationships. Following that I will focus on Chomsky's specific argument that economics dictates the use of official sources as a replacement for independent research. I will argue that while some of Chomsky's arguments for the use of official sources by the mass-media are valid there are now many reliable independent news outlets that can be used as sources causing the belief that economic necessity and financial constraints are no longer true driving forces behind the use of official sources by the mass-media in modern society. ...read more.

After countless years of mass-media subsidization by powerful official sources the mass-media will feel obligated to keep official sources' best interests in mind. By being conscious about what will offend official sources it seems obvious that many disagreeing viewpoints will be classified as unpublishable causing the mass media to fill these lost spots with more officially sourced news, clearly not an issue related economic necessity. Although I believe my criticism nullifies Chomsky's argument that economic necessity is a driving force behind the use of official sources, it does not collapse the entire propaganda model or the third filter itself. The negation of this claim allows for greater focus on reciprocity of interest within the filter and how long-standing relationships between the mass-media and official sources affects the news that is published. It is clear that through the rise of information technology and ease of access to non-official sources that the mass-media can indeed afford to publish multiple independent viewpoints. If it is the case that the mass-media chooses not to do so it must be attributed to reasons other than economic necessity. Sources Edward Herman and Noam Chomsky 'Preface' and 'Chapter 1: A Propaganda Model' in Manufacturing Consent: The Political Economy of the Mass Media. Pantheon Books, N.Y., 1988. xi-xv. and 1-35. Gouveia 1 ...read more.