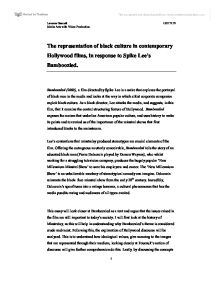 The representation of black culture in contemporary Hollywood films, in response to Spike Lee's Bamboozled.

The representation of black culture in contemporary Hollywood films, in response to Spike Lee's Bamboozled. Bamboozled (2000), a film directed by Spike Lee is a satire that explores the portrayal of black race in the media and looks at the way in which elitist corporate companies exploit black culture. As a black director, Lee attacks the media, and suggests, in this film, that it remains the central structuring feature of Hollywood. Bamboozled exposes the racism that underlies American popular culture, and uses history to make its points and to remind us of the importance of the minstrel shows that first introduced blacks to the mainstream. Lee's contentions that minstrelsy produced stereotypes are crucial elements of the film. Offering the outrageous as utterly conceivable, Bamboozled tells the story of an educated black man (Pierre Delacroix played by Damon Wayans), who whilst working for a struggling television company, produces the hugely popular 'New Millennium Minstrel Show' to save his employers and career. The 'New Millennium Show' is an unbelievable mockery of stereotypical comedy can imagine. Delacroix reinvents the black- face minstrel show from the early 20th century. Incredibly, Delacroix's spoof turns into a ratings bonanza, a cultural phenomenon that has the media pundits raving and audiences of all types excited. This essay will look closer at Bamboozled as a text and argue that the issues raised in the film are still important to today's society. I will first look at the history of Minstrelsy, as this will help in understanding why Bamboozled's theme is considered crude and racist. Following this, the explanation of Hollywood discourse will be analysed. This is to understand how ideological values, give meaning to the images that are represented through their medium, looking closely at Foucault's notion of discourse will give further comprehension do this. Lastly, by discussing the concepts of representation and stereotypes, I will transfer these theories onto recent contemporary films that have 'come out' of Hollywood. ...read more.

Hall states that ' it is not the material world that conveys meaning: it is the language system or whatever system we are using to represent our concepts. (Pg.25, Hall, 1997). It is important to look at how representation contributes to the meaning of 'difference' in film as I highlighted earlier, the first images of black culture surrounded the notion of blacks being lazy and primitive, this idea stayed in the minds of some. Studying film representations therefore involves understanding the creation of new forms or ways of understanding reality. As Stuart Hall argues, the meaning of external 'reality' itself is a construction of media. Media texts are not simply external ways of representing a reality out there. They themselves constitute the meaning of reality. For example, the cultural meaning of 'black' is created in Hollywood films, as primitive to larger dominated groups, in terms of culture and morals. Film can create and sustain the majority's accepted social stereotypes of minority groups. Depending on the groups' place in society, these representations can be positive or negative. The lack of knowledge of other cultures very often results in more dominant groups relying on stereotypes, to formulate opinions about minority groups. Images and portrayals of these groups, often stick in the minds of other groups, A stereotype is a fixed and simplified characterisation that is constantly repeated to gain acceptance, by mainstream audiences. These characterisations are usually exaggerated. Stereotype's focus on one aspect of a social type and amplify it. For example, the "Uncle Tom" stereotype in early Hollywood films was understood through his willingness and need to please whites. In order for a stereotype to 'work' it needs to be recognised by an audience. Decisions are then usually made. Negative stereotypes often results in negative opinions of others. The negative use of stereotypes towards black culture, often draws upon the structuring absence created by suppressing the difficulty of the black man, this is done by claiming their one-dimensional role as the whole and the absence of certain Characteristics (in this case, lack of independence, moral strength, anger, etc.) ...read more.

Murphy, like the other black actors that I have mentioned are Hollywood's official icon of the black race. And are cast accordingly. Murphy's character (Trey) goes through all the traits of a stereotypical black man. He is not stable or serious about life and career choices, he is more interested in joking around. The film reinforces, to the audience, their idea of black culture by using stereotypes. For example, the muggers were black and Hispanic, and were presented to us as primitive, in terms of irrational thinking. Most disturbing, however was the constant reference to black men and their love for guns. One scene that reinforced the idea of black culture to their audience, was when they showed De Niro's character happily content with his 'old' car, while Murphy, tough he earned less, (this point was made clear) enjoyed the luxury of a really expensive Porsche. Adding to the stereotype that black me love fast cars. This mainstream Hollywood film portrays black males negatively. Films made in this way only add to the existing stereotypes that people have. It is clear to see, then, that by watching ShowTime, Hollywood discourse is somehow misleading. Lee's bamboozled forces us to remember how close in time we are to the hateful racism of minstrel shows and how minstrelsy has influenced our current popular culture. By understanding the meaning and full implications that representations have on connotation, I've shown how perpetuated stereotyped images continue in modern films. Some may argue that blatant racism like that of the minstrel show have long declined off our screens, but I have only to look at contemporary Hollywood films to discover that all genres persist on representing black culture negatively. You only have to look at Oscar winning films, Training Day (2001) and Monsters Ball (2001), to understand that the racism that Spike Lee debates' about is still a big issue that needs to be tackled. Personally, I believe that unless people from minority cultures become producers and directors, the idea that blacks are 'stupid fools' will always appear on screen Laverne Garnett 10177179 Media Arts with Video Production 1 1 ...read more.