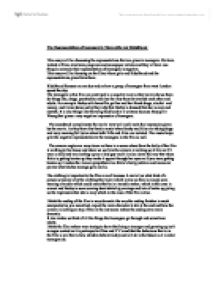 The Representations of teenagers in Mean girls and Kidulthood

The Representations of teenagers in Mean girls and Kidulthood

This essay will be discussing the representations that are given to teenagers .We have looked at films ,television programs and newspaper articles and they all have one thing in common their representation of teenagers is negative.

This essay will be focusing on the films Mean girls and Kidulthood and the representations given form them.

Kidulthood focuses on one day and on how a group of teenagers from west London spend the day.

The teenagers in this film are portrayed in a negative way as they movie shows them do things like, drugs, prostitution and also the way they act towards each other and adults. For example Becky sells herself to get her and her friend drugs, alcohol  and money, and it also shows us by they why that Becky is dressed that she is easy and sluttish. It is also things like throwing food back at a waitress because they got it

Wrong that gives a very negative impression of teenagers.

The soundtrack compliments the movie very well and it suits the impression given by the movie. As they have fast hectic music when Becky and Alisa are taking drugs and very meaning full lyrics when both Trife and Alisa are isolated. The music helps give the negative representation to the teenagers in the film as well.

The camera angles are very clever as there is a scene where Sam the bully of the film is walking to his house and when we see him the camera is looking up at him as if it were a child and was looking up too a bad guy and it is also clever the way that when Katie is getting beaten up they make it appear through her eyes as if you were getting beaten up it makes the viewer sympathetic too Katie’s bully problem and moreover proves what bitches teenage girls can be.

The clothing is important to the film as well because it can tell us what kind of a person someone is by the clothing they were which is true as Sam is always seen wearing a hoodie which could mean that he is a trouble maker, which in this case is correct and Becky is seen wearing short shirts big earrings and lots of make up giving us the impression that she is easy which in the case of the film is true.

I think the ending of the film is very dramatic the way the ending finishes is much unexpected as you would not expect the main character to die at the end and how the camera is looking on top of him in the last scene makes the ending even more dramatic.

It also makes us think of all the things that teenagers go through and sometimes adults.

I think the film makers were trying to show that being a teenager and growing up isn’t as sugar-coated as it is portrayed in films and TV’s and that the behaviour that is in the film is real that is how children behave today and will do in the future as it is what teenagers do.

Overall this adds a lot to the impression as with all these elements combined the representation would not be as strong and negative.

The film ‘Mean Girls’ is about a home schooled girl how transfered is  to a typical American high school where she gets her self into the ‘popular crowd’ and discovers a new side of her which is not very good and it is about the relationships teenage girls have with each other.

The way teenagers more teenage girls are portrayed in this film are as scheming bitches, stuck up and mean.

The main group that most people want to be in (the plastics) act superior to everyone else and the attitude of wannabes reflects this.

There is a scene at the very beginning where everyone is talking about Regina and one of the girls say ‘One time she punched me in the face…it was awesome.’ That just shows that Regina George (the queen bee) is just as ruthless as her reputation suggests and that just shows how much peer pressure there is in high schools.

Regina George is the mean girl that every high school has she is pretty, mean, smart and a big influence on the high school experience.

Now I think the best relationship in the film is the one between Regina and Janis, as the both hate each other but are very upfront about it, it shows that not all girls are fake and smiley.

I think that having at least one relationship like that in the film gives it an edge as it shows a different aspect of girls not liking each other.

The clothing from the film tells us a lot about where the film is coming from and the impression it wants to give.

There is a scene referring to Halloween and all the narration of the story refers to it as ‘the one night a year a girl can be dressed like a total slut and get away with it’, as apposed to what Halloween is really about.

The clothing also gives the audience the impression that in a sense the girls are selling themselves and they are ok with it.

The camera angles are in front of them so you can see every movement and facial expression it shows us that unlike some films we are not going to sympathise for them or get into the characters position but are just merely watching and witnessing their lives and picking up all the images and interpretations that are given off from the film.

Overall the representations of teenagers from these two films alone are not good, as it represents that teenagers are sluty, mouthy, rude, obsessed with sex and just overall bad people and that is a very commonly used stereotype for teenagers.

Being a teenager myself I defiantly think this representation is unfair because we are not all like that and it can be very frustrating because people judge you by the fact that you’re a teenager they do not get to know you first.

The media has a lot of power and influence over stereotypes because it is constantly used wither it is in a newspaper or a film or a book are any other media related thing, I personally can not think of one thing that does not have something to do with the media or stereotypes.