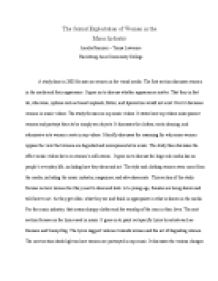 The Sexual Exploitation of Women in the Music Industry - study of the portrayal of women in music videos.

﻿The Sexual Exploitation of Women in the Music Industry Amelia Ramirez ? Tonya Lawrence Harrisburg Area Community College A study done in 2003 focuses on women in the visual media. The first section discusses women in the media and their appearance. It goes on to discuss whether appearances matter. That they in fact do, otherwise, options such as breast implants, Botox, and liposuction would not exist. Next it discusses women in music videos. The study focuses on rap music videos. It states how rap videos misrepresent women and portrays them to be simply sex objects. It discusses the clothes, erotic dancing, and submissive acts women create in rap videos. It briefly discusses the reasoning for why some women oppose the view that women are degraded and misrepresented in music. The study then discusses the effect music videos have on women?s self-esteem. It goes on to discuss the huge role media has on people?s everyday life, including how they dress and act. The style and clothing women wear come from the media, including the music industry, magazines, and advertisements. This section of the study focuses on how women feel they need to dress and look. At a young age, females are being shown and told how to act. As they get older, what they see and think in appropriate is what is shown in the media. For the music industry, that means skimpy clothes and the worship of the men in their lives. The next section focuses on the lyrics used in music. It goes on to point out specific lyrics by artists such as Eminem and Snoop Dog. The lyrics suggest violence towards women and the act of degrading women. The next section sheds light on how women are portrayed in rap music. It discusses the various changes rap music has made, but that the representation of women has stayed the same throughout the years. ...read more.

The message from the video is basically that despite having power and being strong, you are still a sex image and men will still lust after you. The research done will be more specific to music videos and women being sexually exploited in them. Although studies have been done on this subject matter, this study will be the most popular videos of 2013, and will focus strictly on sexual imagery. There were two testable hypotheses for the study done: H1: Women are shown as sexual objects in more than half of 20 of the most popular music videos of today?s time. H2: Music videos use women as props and to entice the audience. Methodology The study done was a content analysis that looked at popular music videos of 2013 and focused on the sexual exploitation of women in the videos. The videos used were from a popular website for music, VEVO. The study looked at the top 20 ?Top Videos? of the website. There was a list of sexually explicit moments common in music videos such as women in skimpy clothes and women dancing seductively. There were fifteen different things the study listed to spot in each video. Every time one thing happened, it was be marked. At the end of the 20 videos the data was collected and calculated to be put into a percentile group. A list of all the content that was looked for will be provided below. - Women in skimpy clothing - Women undressing - Women artist yearning for male - Women touching self - Women touching other women - Women artist crying or depressed - Kissing between anyone - Women dancing seductively alone - Women dancing with other women seductively - Women grinding on men - Camera focuses in on breasts of women - Camera focuses on buttocks - Women licks lips or object seductively - Women purse lips together or blows kiss - Some type of liquid is poured on female A list of the 20 music videos and artist used for the content analysis will be provided below. ...read more.

Some videos are too sexually explicit to be aired on television. There are even videos and lyrics that suggest violence against women. These videos give young men (the most impressible) very wrong ideas. These videos give men an unrealistic standard for women?s bodies. Almost 41 million women in the United States over 20 are obese ("Prevalence of obesity," 2012). The majority of women are not ?perfect? looking. Women come in all shapes and sizes and should not be pressured to change their body. Not only does it put these unrealistic expectations in males? heads, but it also gives the impression that women are only used for their bodies. The women shown in music videos are silent and only shine light on their bodies, not their minds. Women live in a world today where almost every aspect of society focuses on how they look. Music videos only reinforce this. There are some videos that are unique by going against the norm of having women be sexually exploited in music videos. Like the two in the study, there are some videos that have no women dancing around or half naked. There are some songs that are feminist and some artist as well. The few videos that are out there like this give hope for the music industry. It women use their voices, there could be changes made. Women need to realize what is going on and realize how women are being used in music videos. This content analysis could use improvements. The most important would be the details. Content analyses need to be very specific in what they are looking for, and very detailed in the observations. This content analysis could be good solid ground for another study to grow out of it. With a few changes, this content analysis could be replicated and be very successful. To improve the results a specific genre of music videos, such as rap, could have been used. A different popular music site could have also been used. With a few tweaks here in there in this content analysis it could be very successful. ...read more.