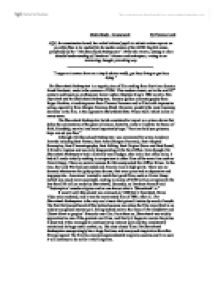 The Shawshank Redemption&quot;. Write this review, aiming to show detailed understanding of Darabont's themes and techniques, writing in an interesting, thought-provoking way.

Media Study - Coursework By Thomas Lock AQA, the examination board, has asked selected pupils to submit written reports on possible films to be studied for the media section of the GCSE English exam, specifically of the "The Shawshank Redemption". Write this review, aiming to show detailed understanding of Darabont's themes and techniques, writing in an interesting, thought-provoking way. _______________________________________________ "I suppose it comes down to a simple choice really, get busy living or get busy dying." The Shawshank Redemption is a superb piece of film making from first-time director Frank Darabont, made in the summer of 1994. This modern classic, set in the mid 20th century and based on, professional horror author, Stephen King's 1982 novella Rita Hayworth and the Shawshank Redemption, features golden cinematography from Roger Deakins, a touching score from Thomas Newman and is filled with impressive acting, especially from Morgan Freeman (Red). However, possibly the most imposing character in the film, is the oppressive Shawshank State Prison itself, which looms in every scene. The Shawshank Redemption builds considerable impact as a prison drama that defies the conventions of the genre (violence, brutality, riots) to illustrate its theme of faith, friendship, survival and most importantly hope. "Fear can hold you prisoner, hope can set you free." Although The Shawshank Redemption was nominated for seven Academy Awards including Best Picture, Best Actor (Morgan Freeman), Best Adapted Screenplay, Best Cinematography, Best Editing, Best Original Score and Best Sound, it failed to impress and was very disappointing at the Box Office. Even though The Shawshank Redemption had a relatively small budget, after initial box office sales, it had still made virtually nothing in comparison to other films of the same time such as Forest Gump. There are several reasons for this unexpected Box Office failure. At the time, the Cold War had just ended and America was in high spirits. There was no demand whatsoever for gritty prison dramas, that were perceived as depressive and inappropriate. ...read more.

He used cold, dark colours to portrait sadness and inhumanity within the prison. For example, in the scene where Andy first enters the prison, everything is grey; the sky and the prisoners uniforms included. At the beginning of the film, Deakins gives us a sweeping helicopter shot of the whole prison and we see that the setting was perfectly chosen and suit's the style of the film excellently. The buildings are grey, plain and distressing. This was done by Deakins to show depression and routine. Also, the bleak colours of the prison are emphasised by lighting to show loneliness, because when Andy first enters the prison he is alone. In contrast, during the roof tarring scene, the sky is blue and the sun is bright. Andy has managed to make a deal with Captain Hadley (a guard) and has got him and his friends some beers. We are given a shot of them sitting on the roof, the sun in their faces, drinking ice cold beer. Red says "we could have been tarring out own roof". The men felt free and the sun shining on the their happy faces showed us a sense of humanity. We saw these men aren't all bad. For that short period of time, they broke the routine. The colours were bright and colourful so it gave us a sense of liberation. Also we can see a contrast of colour between the inside and the outside of the prison. Before Andy was sent to Shawshank we could see bright colours, for example the red dress his wife was wearing which represents heat, passion and love. On the other hand, when Andy enters the prison we see dark, cold tones of grey and black to signify hatred, brutality and coldness. The opening shots of the prison as Andy arrives to begin his two life sentences, are ones of an expanse of grey lifeless concrete blocks and bars. ...read more.

For example, in the scene where Andy plays the music, the Warden bangs on the door and demands that he turns it off. Andy reaches over to the record player and we think he is going to turn it off, like the Warden asked, but to our great surprise he turns it up. Andy had to spend some time in "the hole" for that stunt. The night Andy is going to escape, he asks Hayward for a length of rope, and as nightfall arrives, he is sitting on his bed, the rope in his hands. Again, we immediately think that he is going to hang himself, like Brooks, but again Darabont has deceived us. Andy is going to use the rope to escape. This is very effective as it leaves us on the edge of our seat every time. We can never relax because, although we think we know what is gong to happen, we never do. The Shawshank Redemption is an artistic masterpiece that announced the arrival of a promising new director in Frank Darabont. Darabont works with Deakins and Newman to create first rate screenplay. The film contains top acting and fully deserves the praise it is now beginning to receive which is long overdue. With its call of "get busy living or get busy dying" The Shawshank Redemption is a modern fairytale that has had success through the video rental industry. It defies the trademarks of its genre to show Andy Dufrense's self determination , confidence, and hope. The film has a happy ending, that brings a tear to the eyes of its lovers. Andy's friendship with Red shows compassion and humanity, the story of two friends who met in a high security prison, and we reunited on a beautiful, sandy beach. The film has a spiritual meaning, and Darabont's flare for directing has created a not only a cracking film, but an art form. The Shawshank Redemption creates a warm hold on our feelings because it makes us a member of a family, a family that will be remembered for a long time to come. ...read more.