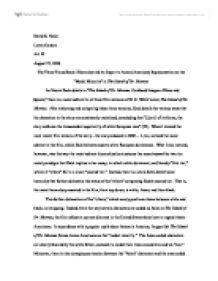 The Three-Tiered Racial Hierarchy and its Import to Asian (American) Representation as the &quot;Model Minority&quot; in The Island of Dr. Moreau

David S. Neale Lewis Gordon AA 10 August 25, 1999 The Three-Tiered Racial Hierarchy and its Import to Asian (American) Representation as the "Model Minority" in The Island of Dr. Moreau As Naomi Zack details in "The Island of Dr. Moreau: Confused Images of Race and Specie," there is a racial subtext to all three film versions of H. G. Wells' novel, The Island of Dr. Moreau. After analyzing and comparing these three versions, Zack details the various ways that the characters in the story are consistently racialized, concluding that "[i]n all of its forms, the story enforces the transcendant superiority of white European man" (52). When I viewed the most recent film version of the story-the one produced in 1996- I, too, noticed the racial subtext in the film, which Zack believes asserts white European dominance. What I also noticed, however, was the way the racial subtext hierarchically structures the races beyond the two tier racial paradigm that Zack implies in her essay, in which white=dominant, and thereby "first tier," while all "others" fall to a lower "second tier." Instead, there is a stark three-tiered racial hierarchy that further delineates the status of the "others" composing Zack's second tier. That is, the racial hierarchy presented in the film, from top-down, is white, Asian, and then black. This further delineation of the "others," which newly positions Asian between white and black, is intriguing. Indeed, from the way certain characters are coded as Asian in The Island of Dr. Moreau, the film reflects a current dilemma in the United States about how to regard Asian-Americans. In accordance with a popular myth about Asians in America, I argue that The Island of Dr. Moreau frames Asian-Americans as the "model minority." The Asian-coded characters are clearly favored by the white father, and seek to model their lives around him and his "law." Moreover, there is also conspicuous tension between the "Asian" characters and the ones coded black. ...read more.

society may be perceived as being "better" than other "minorities," specifically blacks and Hispanics, or "sell-outs" to dominant white America. As a result, Asian-Americans may somehow be perceived as being favored by dominant white society because of such factors as educational and economic success, or that Asian-Americans are somehow better suited for, and thus have better access to, the American marketplace. Curiously, something akin to the latter scenario occurs in Moreau. The tension between the "Asian" and "black" characters in the film are best represented in the conflicts that both Thai and Aissa have with the other animal-beings, of which the latter encounter is the most explosive. In Thai's encounter, he is conspicuously called upon to "take sides" in the scene where Hyena-man and his cohorts break into the big house and threaten the Father. From the moment Thai senses that the Father is in danger, he immediately goes to fetch the medallion "zapper" so that the Father may "discipline" them with pain. Perhaps coming as no surprise given his previous mimicry, Thai's allegiance in this scene clearly remains with the Father, even to the point of potentially inflicting pain upon another animal-beast "brother." Clearly, Thai may be read as "selling out." Presumably he pays the price for such allegiance to the white Father. Given that he conspicuously disappears from the story line after Hyena-man and his "black" buddies murder the Father, I suspect Thai shares his same fate. Aissa's conflict erupts most notably near the end of the film in her dramatic fight with Dogman and his cohorts. Dogman, although he lived in the "big house" with the "civilized Asian" animal-beings, is not "Asian." He is "black." His long matted dreadlocks and dark brown complexion easily reveal his racial affiliation. When Dogman realizes that the tide has turned when Hyena-man amasses a significant following of animal-beings, all of whom can no longer be controlled by the "zapper," Dogman decides to join forces with Hyena-man. ...read more.

Nowhere is this more evident than in the strikingly human appearance of Aissa in comparison to a character like Dogman or Hyena-man. The latter characters, because they are, in essence, "black," must continue to reside outside the margins of humanity-"at a lower point of the evolutionary scale"-as the animals they are inevitably perceived and constructed to be. In conclusion, the three tiered racial hierarchy represented in The Island of Dr. Moreau reflects a similar structuring in "real" life; it is a paradigm that actively conducts discrete instances of sociological aspiration and conflict through the manner it represents race and racial identity. As we have seen, while Moreau uses multiple racial signifiers, extracted both from historical and popular myth, to describe whites, Asians, and blacks, it is the representation of Asians-and particularly Asian-Americans-that I find most intriguing and revealing about the film. Reading the film on a metaphorical plane, Moreau skillfully, though not always subtlety, maps out the racial terrain that it obviously believes represents satisfactorily the varied experiences of Asian-Americans. In producing this topography, the film simultaneously unveils the complexities of identity-and its representation-by showing how both emerge from dialectical-and often trialectical-relationships with the self-proclaimed and perceived identities of other groups, their histories, and their myths. An example, clearly, is that of the "model minority" stereotype and its import to Asian-Americans. As I have shown, the terms of its discourse are negotiated at just the right moment when myth meets, and sometimes crashes into, reality, thereby triggering an ideological battle over the definition and explanations of race. Moreau, then, as a conduit of myth, meaning, and reality, contributes to-as well as passes along-its own notions of contemporary Asian-Americans-notions which clearly overlap with and reflect those currently circulating in the American marketplace. In spite (or perhaps because) of such extant notions, Asian-Americans, while not black, and not white, must nevertheless eke out an existence in the middle of a hegemonic racial hierarchy in the U.S.-even if it means finding (mis?)representation as the "model minority. ...read more.