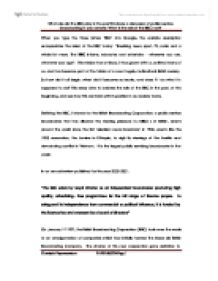 This essay aims to address the role of the BBC in the past, at the beginning, and see how this contrasts with its position in our society today.

When you type the three letters 'BBC' into Google, the website description encapsulates the vision of the BBC today: "Breaking news, sport, TV, radio and a whole lot more. The BBC informs, educates and entertains - wherever you are, whatever your age". This mission has a history, it has grown with us, outlived many of us, and has become part of the fabric of a now hugely multicultural British society. So how did it all begin, when did it become so iconic, and does 'it' do what it's supposed to do? This essay aims to address the role of the BBC in the past, at the beginning, and see how this contrasts with its position in our society today. Defining the BBC, it stands for the British Broadcasting Corporation; a public service broadcaster that has allowed the viewing pleasure to millions of British, events around the world since the first television news broadcast in 1936; events like the 1953 coronation, the famine in Ethiopia, to nightly viewings of the horrific and devastating conflict in Vietnam. It is the largest public servicing broadcaster in the world. In an annual review published for the year 2000-2001: "The BBC exists by Royal Charter as an independent broadcaster producing high quality, advertising- free programmes for the full range of licence payers. ...read more.

For the next 10 years it basked in it's monopoly" (Seymour-Ure: 1991) In spite of this, it is argued by Chapman (2009)"The fact that the BBC was forced under it's license conditions to avoid controversial programming also led to a narrow form of reporting". The language used in the early news broadcasts could be classed as banal. In fact, the whole broadcast was then; black and white, no news reader for fear of a shift away from objectivity through an unexpected facial expression. During the years that followed the war BBC recognised a need to connect with the public whilst they communicated to them; to transform the mass audience into people with individual ideas, beliefs, tastes and aspirations. In 1954 Richard Baker was the first news reader since the introduction of television news in 1936. The ongoing aim of public service broadcasting was, and still remains, to inform. The key here is that news information does not properly inform unless it is accurate. "Principal, as well as expediency, therefore ensured that public service broadcasting was to be impartial" (Seymour-Ure: 1991) Initially the BBC gained its status as a national broadcaster because it was the only broadcaster between the years of 1927 - 1955; no one had anything to compare it to. ...read more.

rich and it requires sizeable funds to be able to conform to norms and goals of the model it presents itself to be. In a report by the BBC chairman, Michael Grade addressed concerns that Public service broadcasting may become commodified; "with profitability the sole measure of its worth". Although no longer a monopoly, whilst still in direct competition with other broadcasters, the BBC has intrinsically embedded itself into British culture and has grounding incomparable to any other public service broadcaster around the world. What it needs to do now is continue to strengthen these networks in the face of competition, and also to satisfy the public consistently and impartially so that the 33million households in the UK who pay the license fee are informed, educated and entertained. It must continue to service the public by utilising technological advancements, and give us groundbreaking news stories from elsewhere in the world, that shake our own. And, at the same time, enhancing the solidarity it created through broadcasting moments Neil Armstrong taking his first steps on the moon in 1969; an event that shook the science of space and the wider universe and was watched by 600million people worldwide. Aside from the uncertain future, as Swann (1978) said of the BBC, "Monopolistic bodies have a tendency to become over mighty". ...read more.