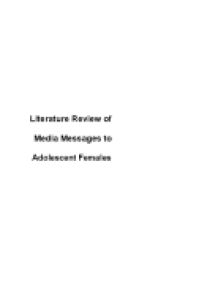 This paper examines the influence that media has on adolescent females feelings towards their place in society, sexuality, self-esteem and body image.

﻿Literature Review of Media Messages to Adolescent Females Submitted By: Debi Naigle Submitted To: Dr. Rick Schwier Class: EdCmm 802 / Historical and Theoretical Foundations of Educational Technolgy Due Date: Saturday, February 12, 2004 ________________ Abstract Research shows that media play a dominant role in influencing females? perceptions of the world around them, as well as helping them to define their sense of self. This paper examines the influence that media has on adolescent females? feelings towards their place in society, sexuality, self-esteem and body image. Areas for future research and possible solutions to some of the problems mentioned are also addressed. Time of Adolescence Adolescence can be a confusing and unsettling time for young adults. Changes to their bodies, their interests, and their social relationships cause them to question who they are and how they fit into the dynamic and confusing world around them. They question their place in their family, with their friends, with their teachers, and with others around them. This is a time of increased self-awareness, self-identity, self-consciousness, preoccupation with image, and concern with social acceptance (Slater & Tiggemann, 2002). Adolescents are trying to discover and solidify their senses of self and their roles in society. Adolescence can be a period marked by severe psychological and emotional stresses (Durham, 1999). It is during this time that gender identities, values of self worth, and sexual attitudes become topics of relentless and serious contemplation. Adolescents are moving from childhood into adulthood. They want to understand their new roles, their new ideas, and their new feelings. This exploration of self and new found independence can result in feelings of anxiety and uncertainty. Now while these changes are occurring in both males and females, it has been found that females experience a more difficult time with this transition than males (Block & Robins, 1993). Adolescent girls are more apt to experience decreased feeling of attractiveness and self-esteem. ...read more.

The prevalence of screen violence on television and in the movies has been found to have the effect of desensitizing viewers to the horror of violence and reducing sympathy for victims (Reid & Finchilescu, 1995). If the victims of violence and aggression are women, adolescent females could identify with them and begin to accept this persecuted role. In a content analysis study by Rich et al. (1998) it was found that ?14.7% [of music videos] contained one or more scenes of overt interpersonal violence ? with a mean of 6.1 violent acts in each music video that portrayed violence? (pg. 670). 78.1% of aggressors were male; reinforcing the stereotype of male forcefulness and antagonism. While women were - 8 - ________________ aggressors only 21.9% of the time, they were portrayed as a victim more than twice as often at 46.3% of the time. And although males and females were represented as victims somewhat equally (53.7% and 46.3% of the time respectively), this does not engender a scenario of equality. It lends to the fostering of the perception that nobody is safe; both genders are equally at risk. But because men are more often the instigator, they are more likely to be seen as in control while females are seen as acquiescent. Sexuality In the past two decades, sexual content on television and in the movies has become more pervasive and explicit. Being sexy and engaging in sexual intercourse is depicted as a normal part of a popular, exciting, and glamorous female?s life. Very seldom are consequences of sexual engagement addressed; most sexual encounters, unless relevant to the immediate story line, have no lasting effects. And when consequences are included, they are generally limited to physical, rather than emotional or social, consequences (Kunkel, Cope & Biely, 1999). Concerns and preventions of sexually transmitted diseases and pregnancy have only recently started to become addressed. As well, in an examination of sexual consequences on teen programming, Aubrey (2004) ...read more.

As well, as the media is becoming more inclusive with the characters and situations they portray, adolescent girls may be able to find positive role models and examples that may not be present in their daily lives. Homosexual teens, girls suffering from eating disorders, or victims of physical, emotional, or sexual abuse may find that they are not alone. More needs to be written on critiquing positive media messages. Solutions Research shows that the media can have a strong effect on how adolescent females view and interpret the world around them. Girls are looking to find their place in society and they use the media as a means to help define and explain their roles. Not all messages are positive, appropriate, or advantageous for adolescent girls. Many of the messages presented give adolescent females the impression that they naturally are expected to take a subservient and submissive role to men. The message is often given that women are not meant to be taken seriously. And their outer image and stature is more important than their character and inner strength. - 16 - ________________ Parents and teachers need to take an active role in helping adolescents understand and interpret the messages portrayed in the media. They need to engage in active, critical viewing to mediate the negative effects of media. Open dialogue can help adolescents gain a better grasp of realistic and attainable goals. As well girls are more likely to make positive choices if they are informed about the dangers associated with attempting to attain unrealistic body images. Van Evra (1990) found that adolescents who have outside, competing information will be less vulnerable to influencing effects. This is especially true if they are taught to not perceive all incoming information as realistic and attainable. If adolescent do not perceive thin ideals on television as realistic, and they have outside information telling them they do not need to live up to those ideals, they will be less vulnerable to negative effects on body and self image. Open communication and realistic expectations will assist adolescent girls from falling prey to negative media influences. ...read more.