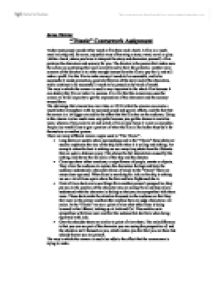 James Fletcher "Titanic" Coursework Assignment Today most people would rather watch a film than read a book. A film is a much more relaxing and, for some, enjoyable way of knowing a story, event, novel or play. Unlike a book, where you have to interpret the story and characters yourself, a film portrays the characters and scenery for you. The director is the person that makes sure the actors are portraying their part correctly and to their full potential, another main concern of the director is to make enough money from the film to pay for it, and still make a profit. For the film to make money it needs to be successful, and to be successful it needs promotion, good clarification of the story and of the characters, and to continue to be successful it needs to be passed on by word of mouth. The way in which the camera is used is very important to the whole film because it can destroy the film or make it a success. It is vital that the cameraman uses the camera to its full capacity to get the expressions of the characters and the scenery around them. The advantage that cinema has over video or DVD is that the cinema can create a much better atmosphere with its surround sound and special effects, and the fact that the screen is a lot bigger can add to the effect that the film has on the audience. Going to the cinema is also much more enjoyable because you get the chance to socialise more, whereas if you were to sit and watch a film in your home it is not as enjoyable. People also watch films to get a preview of what the film is like before they by it for themselves or another person. There are many different camera angles used in "The Titanic": - * Long shots are used to show surroundings and in the "Titanic" these shots are used to emphasise the size of the ship both when it is sailing and sinking. ...read more.

He then telephoned the bridge and shouted down the phone, "Iceberg, right ahead" * 'The utility of Binoculars' - The lookout man stated that he knew that there were no binoculars in the crow's nest before they left Southampton, and yet he knew that he would have to keep a sharp lookout for icebergs as he was instructed. One watchman said to Mr. Lightoller a member of the crew, that there were no binoculars, and Mr. Lightoller said that there was no intention to provide them. One watchman named George Alfred Hogg said, "I believe in my own eyesight better than in binoculars" * 'In the boat with Mr Ismay' - George Thomas Rowe was ordered to take command of the boat on the starboard side of the ship. He called out for any more women and children, and when there was no longer anyone to board the ship, two gentlemen boarded. One of them being Mr. Ismay. The captain of the boat knew that there were 39 people on board, but he did not know until dawn that there were 5 Chinamen, Mr. Ismay, another gentleman and 5 crew, the rest being women and children. * 'The injury to the Titanic's bows' - Samuel Hemming, a lamp trimmer in the Titanic stated that he went into a storeroom above the forepeak tank. Air was coming up through an exhaust pipe at considerable force, which meant that there was water entering the tank. When looking at the events that took place on April 14th 1912 there is a very fine line between the words 'Tragedy' and 'Disaster'. A tragedy is misfortunate event, and a tragic hero is a character who dies as a result of his/her heroism, whereas a disaster is a failure of a project that usually affects a large group of people. When considering who was responsible for the sinking of the Titanic we have to take into account the argument for whether it was a man made or natural disaster. ...read more.

James Cameron focussed on two fictional characters (Jack and Rose) so that he could make the events seem more tragic. If we were to become attached to one or more characters, Cameron knew that when the iceberg hit we would immediately be concerned about them because we care for them so much. Taking it even further would make the film an even better story and more successful, so Cameron decided to have Jack die as the tragic hero, saving Roses life numerous times and becoming loved by the audience, from sympathy because he was 3rd class and because he was a gracious man. Rose dies at the end of the film at 101 to join Jack; I believe Cameron did this to show how love is eternal and also, (for a more obvious reason) - so that the story was believed to be true from a true Titanic survivor. I believe that James Cameron's intention when he made the film was to portray the film well enough so that the audience would be moved and care more about the events that happened in 1912. I think he also wanted to show that love and can blossom between two totally different people. I think that the way Cameron used the sound track and sound effects to create atmosphere was very professional. The way that he can get through to the audiences emotional side by making us feel attached to the characters and therefore making the disaster seem more tragic. I think that Cameron wanted to make people like teenagers who had a brief idea of the events but had no idea of how many people it affected care more about the event, and also people like Brock Lovett who are so insensitive towards the event that they make sarcastic jokes about it. I have thoroughly enjoyed watching and analysing "The Titanic" and believe that it was a terrific piece of work by James Cameron. ...read more.