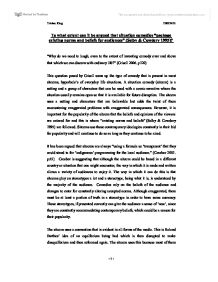 To what extent can it be argued that situation comedies package existing norms and beliefs for audiences (Selby &amp; Cowdery 1995)?

To what extent can it be argued that situation comedies "package existing norms and beliefs for audiences" (Selby & Cowdery 1995)? "Why do we need to laugh, even to the extent of inventing comedy over and above that which we can discern with ordinary life?" (Crisell 2006. p120) This question posed by Crisell sums up the type of comedy that is present in most sitcoms, hyperbole's of everyday life situations. A situation comedy (sitcom) is a setting and a group of characters that can be used with a comic narrative where the situation usually remains open so that it is available for future disruption. The sitcom uses a setting and characters that are believable but adds the twist of them encountering exaggerated problems with exaggerated consequences. However, it is important for the popularity of the sitcom that the beliefs and opinions of the viewers are catered for and this is where "existing norms and beliefs" (Selby & Cowdery 1995) are followed. Sitcoms use these contemporary ideologies constantly in their bid for popularity and will continue to do so as long as they continue to be aired. It has been argued that sitcoms are always "using a formula so 'transparent' that they could stand in for 'indigenous' programming for the local audience." (Creeber 2001. p.65) Creeber is suggesting that although the sitcom could be based in a different country or situation that one might encounter, the way in which it is made and written allows a variety of audiences to enjoy it. ...read more.

In workplace sitcoms, as in soap opera, the majority of events are possible in everyday life but not with the same intensity. Some even push the realms of surrealist by either the setting or a particular character that could be considered unusual or eccentric. Workplace sitcoms seem to be based largely around sexual chemistry rather than about the actual occupation. This is because in 'real life' sexual partners are often chosen from the workplace; therefore the sitcom yet again follows 'real life' norms to attract the audience. When it comes to a sitcom taking realistic, everyday situations and exaggerating them, the 'unruly women' sitcom is best known to do this. "The term [unruly women] describes an icon of a grotesque female whose excesses break social boundaries". (Creeber 2001 p. 68) These social boundaries being the beliefs that are held by the society in which the sitcom will be shown. Examples of the sitcoms where these unruly women are from are Rosanne and Absolutely Fabulous. The excesses that these women represent are fat for Rosanne and excessive make-up and strange clothes for the Absolutely Fabulous women. These characters are created to be this way in order to go against the social acceptance and therefore bring attention to them. Sometimes sitcoms can fall into a number of categories and these are usually considered to be called hybrids. These are when conflicts can arise between work and home and the sitcom shows scenes at both. ...read more.

However, even though the positions that are given to the men and women in sitcoms may have changed, stereotypes are still followed. A male secretary for example, in a sitcom is likely to have feminine traits. 'Less Than Perfect' for example features a secretary called 'Kip' who shows effeminate traits such as constantly checking his appearance and an interest in fashion. Furthermore, the boss in a workplace sitcom, even if it is a woman, is likely to have masculine traits and characteristics. These stereotypes are held on to because that is what the viewers want to see as it is what they know and understand. It seems clear that sitcoms "package existing norms and beliefs" (Selby & Cowdery 1995) in order to gain an audience as it are these beliefs that the audience want to see reiterated. The sitcom does not always follow these beliefs rather than use them to emphasise the difference between the commonly held ideal and the character that the sitcom has created. Nevertheless, the beliefs held by society at the time are used in sitcoms. Whether these beliefs are presented through characters or gone against by the idea of exaggeration through other characters, it is still the known stereotypes that are being used in order to create the sociologically ideal character, or the obscure counterpart. The extent to which sitcoms "package existing norms and beliefs" (Selby & Cowdery 1995) is high because even when it is not creating characters using the stereotypes, it is making a character using the stereotypes as a basis to go against the beliefs that society holds. ...read more.