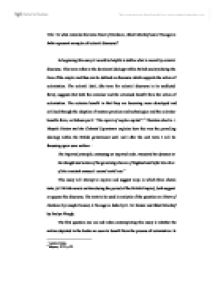 To what extent do the texts Heart of Darkness, Black Mischief and A Passage to India represent examples of colonial discourse?

Title: To what extent do the texts Heart of Darkness, Black Mischief and A Passage to India represent examples of colonial discourse? In beginning this essay it would be helpful to define what is meant by colonial discourse. This term refers to the dominant ideology within British society during the time of the empire and thus can be defined as discourse which supports the action of colonisation. The colonial ideal, (the term for colonial discourse in its undiluted form), suggests that both the coloniser and the colonised benefit from the action of colonisation. The colonies benefit in that they are becoming more developed and civilised through the adoption of western practices and technologies and the coloniser benefits from, as Hobson put it "The export of surplus capital".1 Thornton cited in J. Meyer's Fiction and the Colonial Experience explains how this was the prevailing ideology within the British government until well after the unit texts I will be focussing upon were written: - The Imperial principle, animating an imperial code, remained the dynamic in the thought and action of the governing classes of England until after the close of the twentieth century's second world war.2 This essay will attempt to explore and suggest ways in which three chosen texts, (all British novels written during the period of the British Empire), both support or oppose this discourse. The texts to be used in analysis of the question are Heart of Darkness by Joseph Conrad, A Passage to India by E. ...read more.

There is something vitally unknown about the caves which is never revealed to the reader, this could have the effect of defamiliarising the reader's ideas about India. However the invention of the Marabar caves could also feasibly add to the Orientalist discourses in that the India which is being represented to the reader is mysterious, strange, bewitching and 'other'. Said is of the opinion that Western writers cannot escape the process of othering: This style, this compact definition, is what the Orient will always come up against.11 So if the unit texts add to the construction of the colonised races as 'other' and (compared to Western values), inferior, is it possible that they could be anything other than examples of colonial discourse? In the case of Black Mischeif it is conceivable that this is the case. In this book the natives are characterised by their lack of intelligence and cannibalistic tendencies, the following description of "wise" men highlights the extent to which native Africans stereotypes are played up to in the novel: - The wise men of the surrounding villages danced in the mud in front of Basil's camel, wearing livery of the highest solemnity, leopards' feet and snake-skins necklets of lions' teeth, shrivelled bodies of toads and bats, and towering masks of painted leather and wood.12 However this satirising is not purely reserved for the natives, all the race groups who appear in the novel are caricatured, none more so than the British and French (the two main colonisers of Africa). ...read more.

The novel's heroes, (Fielding, Aziz, Mrs. Moore), are all principally unprejudiced and represent a desire to ignore racial divides. The factor which holds the most sway on this debate is the fact that all these texts were written by British for a predominantly British audience. Therefore they are bound to a degree by the ideologies and discourses which are prevalent in that society. They all add to the sense of the colonised as 'other' in one way or another. However a novel is not capable of criticising categorically the position and dominant ideologies of the intended audience. If this were the case there would be a distinct probability that the audience would not want to read it. All three texts which I have considered during the course of this essay were written at a time when colonial discourse was inherent in society just as the discourses of free enterprise and global capitalism are today and a contemporary Western novel will inevitably be written from this perspective. This is not to say however that the novels are pure examples of colonial discourse, far from it. As the colonies represented in the texts are so far removed from the colonial ideal, the resounding message in all three is that there are weighty problems with colonialism. To conclude the novels speak for a western audience and to this extent they are examples of colonial discourse, but they also oppose colonialism to the extent that they would certainly have raised serious doubts among the audience about the hegemonic colonial discourses at the time of their writing. ...read more.