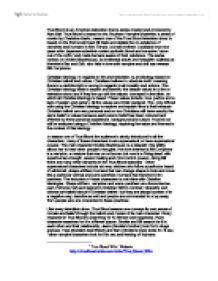 True Blood. True blood will be analyzed using a Christian ideology, exploring the value and themes in the context of this ideology.

True Blood is an American television drama series created and produced by Alan Ball. True Blood is based on the Southern Vampire Mysteries a series of novels by Charlaine Harris, season one of the True Blood television show is based on the first novel Dead till Dark and details the co-existence of vampires and humans in Bon Temps, a small northern Louisiana town two years after Japanese scientists create synthetic blood and vampires 'came out of the coffin' and made humans aware of their existence. The series centers on Sookie Stackhouse, an incidental sleuth and telepathic waitress at Merlotte's Bar and Grill, who falls in love with vampire and civil war veteran Bill Comptone. Christian ideology, in regards to film and television, is an ideology based on Christian beliefs and values. Christians believe in absolute truth, meaning there is a definite right or wrong in regards to all morality and actions. The Christian ideology seek to search and identify the deeper values in a film or television show and if they line up with the values conveyed in the bible, on which all Christian ideology is based. These values include love, justice and a lack of sexism and racism. All the values are Christ centered. The only difficult with using the Christian ideology to explore and explain films is that because Christian beliefs are very personal and no two Christians will have exactly the same belief or values because each person belief has been coloured and affected by there personal experience, background and culture. ...read more.

The use of language and sexuality is very dominant in True Blood season one. The language in this series is very strong. Every scene has a number of swear words in it which makes it very offense to some audiences. The sexual component in this series would also offend many audiences. Sex scenes are frequent, graphic and sometimes violent. This put True Blood in a contrary position to Christian beliefs. True Blood is promoting that swearing is expectable and fashionable where the Christianity would take the stance that language should be used to build up people which swearing does not do. In the same way Christianity would view sex is within the boundaries of marriage and should be a intimate lovely experience not something that is expendable there this series conveys that sex isn't special, but its just a basic animal instinct that has to be fulfilled. Sex is so entrenched in the show that the opening sequence has many sexual and sex scenes in the title sequence. The True Blood series is based on the Southern Vampire Diaries. Series one is based on the first book of the series. The book and the television show are mirror each other in many ways the most notable difference except in one major way. In the book there is homosexual content but in the show it a major feature. ...read more.

refuses to talk to directly with her because she is a 'creature of the devil' (Theodore Newlin True Blood, season one, episode two). He portrays Christians as bigoted, single minded and aggressive. The second Christian character that is introduced to the audience in True Blood is Lettie Mae (Tara's Mother). Lettie is an abusive and neglect mother due to her alcoholism. It the first episode Tara is talking to her cousin about her mother's problem. 'Mama says she doesn't need A.A cos' she has Jesus' (True Blood Season One Episode Two) The show portrays Christians, especially Christians from the southern states as idiotic and bigoted. Viewing True Blood season one through the lenses of the Christian ideology is an interesting and helpful way to analyses this very popular television drama from HBO. From the use of supernatural characters, different themes, language and the portrayal of Christians allows the conclusion to be drawn that this television show no way adheres to Christian beliefs and if a Christian was to watch they would come be able to identify that it did not align with their faith. Even though it doesn't align with the Christian faith it does have value in watching, it gives an amazing clear and concise insight into secular values in society 1 True Blood Wiki. Website: http://trueblood.wikia.com/wiki/True_Blood_Wiki access date: 18/09/2010 2 True Blood with Alan Ball, Anna Paquin and Stephen Moyer. Website: http://www.thedeadbolt.com/news/104978/trueblood_interview.php accessed date: 18/09/2010 ...read more.