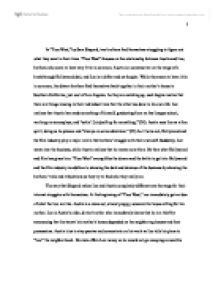 In "True West," by Sam Shepard, two brothers find themselves struggling to figure out what they want in their lives. "True West" focuses on the relationship between Austin and Lee, brothers who seem to have very little in common. Austin is a screenwriter on the verge of a breakthrough Hollywood deal, and Lee is a drifter and cat burglar. While they seem to have little in common, the distant brothers find themselves back together in their mother's house in Southern California, just east of Los Angeles. As they are catching up, each begins realize that there are things missing in their individual lives that the other has done in his own life. Lee realizes that Austin has made something of himself, graduating from an Ivy League school, working on screenplays, and "settin' [him]self up for something,'"(26). Austin sees Lee as a free spirit, doing as he pleases and "always on some adventure." (26) As it turns out, Hollywood and the film industry play a major role in the brothers' struggle with their own self. ...read more.

As Saul enters the story, Lee begins to hint that maybe he wants to make something of his life like his brother Austin. Austin has a meeting with Saul to talk about a project that Austin has been working on. Lee crashes the meeting, carrying a stolen television set, and immediately introduces himself to Saul. Lee slyly begins a conversation with Saul, first about golf, then about his "true to life western." Saul convinces Austin to write and outline for Lee, which he does apprehensively. While they are together doing this outline, Austin tells Lee, "it'd be really fantastic if you could sell this. Turn it into a movie... You could really turn your life around, you know. Change things." (24) This gets Lee thinking more and more about making it in the world, while at the same time, Austin begins to think more and more about being like Lee. Austin says, "Lee's got the right idea. He's out there in the world and here I am. ...read more.

Is that it? Just trade horses in midstream? After all these months of meetings. Saul: I wish there was another way. Austin: I've got everything riding on this, Saul. You know that. It's my only shot. (35) This sets Austin off, and there is an immediate transformation in his character. There is a sudden turn against Hollywood and everything that was Austin was defined as. Conversely, Lee has decided to pursue a Hollywood dream, even though he refereed the money earlier as "blood money." Each is beginning to take each others personas. Throughout this play, Hollywood and the film industry plays a large role in the development of the characters and controls all their actions in the end. Saul helps Lee begin a dream that Lee never though would happen. Saul also single handedly ended Austin's dream work and changed his life and path. In the end, Hollywood and Lee's script is the thing that leaves the Austin choking Lee on the kitchen floor with their mother watching. They were both affected by the dreams and heartbreak of Hollywood. There isn't always the glitz and glamour that everyone sees, and these two just realized the harsh reality of the film industry and Hollywood. 1 ...read more.