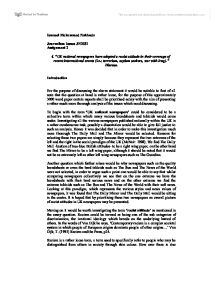 Ismaeel Mohammed Nakhuda Journalism Issues JN2031 Assignment 2 4. "UK national newspapers have adopted a racist attitude in their coverage of recent international events (i.e.; terrorism, asylum seekers, war with Iraq)." Discuss. Introduction For the purpose of discussing the above statement it would be suitable to first of all note that the question at hand is rather loose, for the purpose of this approximately 3000 word paper certain aspects shall be prioritised solely with the aim of presenting a rather much more thorough analysis of the issues which need discussing. To begin with the term 'UK national newspapers' could be considered to be a collective term within which many various broadsheets and tabloids would come under. Investigating all the various newspapers published nationally within the UK is a rather cumbersome task, possibly a dissertation would be able to give full justice to such an analysis. Hence it was decided that in order to make this investigation much more thorough The Daily Mail and The Mirror would be selected. Reasons for selecting these two papers are simply because they represent the two extremes of the left and the right in the social paradigm of the UK (McNair: 1998). We find The Daily Mail -bastion of true-blue British attitudes- to be a right wing paper, on the other hand we find The Mirror to be a left wing paper, although it should be noted that it would not be as extremely left as other left wing newspapers such as The Guardian. Another question which further arises would be why newspapers such as the quality broadsheets or even the hard tabloids such as The Sun and The News of the World were not selected, in order to argue such a point one would be able to say that whilst comparing newspapers collectively we see that on the one extreme we have the broadsheets with their hard serious news and on the other extreme we find the extreme tabloids such as The Sun and The News of the World with their soft news. ...read more.

On the other hand the left wing Mirror is not as guilty of this but rather much more partial. An article titled: 'I'm proud to fight asylum witch-hunt8 is clearly indicative of the attitude of The Mirror in general. We find the author in effect saying that it is 'totally illogical' that all asylum seekers are witch-hunted and locked up due to the arrest of a 'couple of Algerians' suspected of terrorism. Rather the author describes many of the positive prospects of bringing in asylum seekers such as introduction of skilled labour, a new labour force and the payment of taxes which would benefit the economy. Here we clearly see that the author has projected the qualities of the 'other' and unlike other newspapers has not sidelined positive aspects. It could be said that the views of the dominant has been presented together with the views of the subordinate which obviously would drive the writer, the article and the paper in general, away from such allegations of undertaking a racist attitude in the reporting of news. On the contrary The Daily Mail, as can be seen from the above examples, has sidelined the better qualities of the sub-ordinate group and in turn behaved in a racist manner. On the 6th of February both The Daily Mail and The Mirror ran articles regarding an OFSTED report of how badly behaved pupils are shattering government plans to improve state run education in the UK. In the Mirror, children of asylum seekers are merely referred to on only one occasion, a few paragraphs down, in the words of the Mirror: 'Schools with a high proportion of asylum-seekers are particularly prone to high pupil turnovers and the education of thousands of pupils is affected as a result, says the report.9' On the other hand The Daily Mail begins the exact same story from a different perspective, the headline to the story reads: 'Asylum pupils 'disrupt lessons for thousands10'. ...read more.

Nevertheless the portrayal by both newspapers in particular The Daily Mail of Hamza has led ignorant non-Muslim communities to believe that Hamza is a significant member of the Muslim community. Articles referring Hamza as a 'cleric' and 'a leader of Muslims' together with pictures of him with his looks which are different to western social norms, his hooks and single eye, scars of warfare which are typical traits of barbarism conjures the colonial or rather crusader negative stereotypical image of Muslims, a form of racism indeed, for which academics have coined a new word 'Islamaphobia'. Conclusion The Daily Mail has undertaken a racist attitude in the manner by which it has reported news in recent times. We see that 'the others' are stereotyped; marginalized and positive imagery of them is excluded from gaining substantial coverage in the pages. Stories regarding 'the others', with biased aspects that contain negative connotations such as crime, abduction, drugs, violence etc are reported abundantly and thus the negative aspects of subordinate groups have been magnified, something which is most typical in prejudiced racist literature. Through the usage of headlines, lay outs and metaphors minority ethnic communities and asylum seekers are portrayed as being different and also a threat to the British society. On the other hand The Mirror has at times let it self slip and has ran stories where in which the negative aspects of 'the others' are magnified, but in general it has endeavoured to give a rather more balanced out look in its' coverage of recent events. The Mirror has also endeavoured to keep the 'asylum' and 'terrorism' issues separate, but on the other hand The Daily Mail has not been so fair and in a racial manner has interwoven both aspects rather intimately. Hence in conclusion it could be said that within mainstream media one would be able to say that in large bias/racism is rather explicit, as is the case amongst the tabloids, on the other hand on a rather much more subtle and indirect manner the quality press is not perfect either. ...read more.