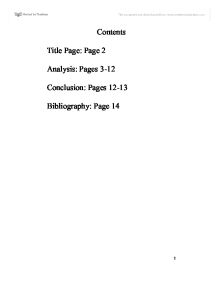 Unpicking the monstrous: A Psychoanalytic and Marxist analysis of Alien.

Contents Title Page: Page 2 Analysis: Pages 3-12 Conclusion: Pages 12-13 Bibliography: Page 14 Name: Liam Stott English and Film & Media Studies Level Two Unit Title: FS299 - Critical Approaches to Media Research Unit Tutor: Marc O' Day Course Leaders: Marc O' Day/Melanie Selfe Assignment 2: Negotiated Essay 'Unpicking the monstrous: A Psychoanalytic and Marxist analysis of Alien.' Barbara Creed states that the convergence of psychoanalysis and cinema studies initiated at the end of the nineteenth century. Since the 1900s, psychoanalysis has endured a complicated history because of its elusive concepts and theoretical influences, particularly in post-1970s psychoanalytic film theory. Throughout the 1970s, psychoanalysis informed and contributed to other cinematic critical approaches such as post-colonial theory, queer theory, feminist film theory and body theory (Creed in Hill and Gibson, 2000: 75-77). Alien (dir. Ridley Scott, 1979) is a significantly psychoanalytic film, symbolically underpinned by a range of psychoanalytic notions such as sexuality, the unconscious, phallicised, primal phantasies (Lebeau, 2001: 7), the woman as an actively sadistic monster and the cinematic voyeuristic male gaze at the expense of female sexual objectification (Taylor in Jancovich and Hollows, 1995: 151). However, Alien cannot only be interpreted through the critical approach of psychoanalysis. Alien can also be critically read from a Marxist perspective. John Storey argues that Marxism is centred on the ruling classes or bourgeoisie as the dominant force that governs society over the subordinate classes (Storey, 1993: 99). This is emphasised by Matt Perry who suggests that Marxism positions society as a 'two-way relationship between the exploiter and the exploited' and says that the ruling classes are primarily interested in material objects and disregard the exploited proletariat, resulting in class warfare (Perry, 2002: 44). This is highlighted in Alien, where the Company exploits its Nostromo mine workers in a degrading fashion. The Company is only interested in the alien as a commodity of weapons research, irrespective of its unique killing abilities and indestructible power. ...read more.

Ridley Scott's use of cinematography during the finale is sexually significant, for example, the camera shows her back, legs and 'erect nipples' under her white shirt. The camera also depicts her underwear that apparently seems to be a few sizes to small, appropriately to reveal her buttocks. There are also close-up shots of Ripley's face, the alien's tongue as the symbolic phallus and vaginal shots of Ripley (Gallardo and Smith, 2004: 55). This is not intentionally pornographic, however it does conform to what Andrea Dworkin calls the 'male erotic trinity,' a somewhat pseudo-pornographic subtext centred on the face, phallus and vagina, indicated by the close-up shots of Ripley and the alien (Dworkin in Gallardo and Smith, 2004: 55). This scene signifies Ros Jenning's notion of a tokenised 'objectification of the female body for the viewing pleasure of the male audience' (Jenning in Gallardo and Smith, 2004: 55). The climax concludes when Ripley manages, with an almighty orgasmic scream, to press the control panel that blows open the hatch. Her dramatic diegetic scream creates a copulative, hyperbolic atmosphere, augmenting the visually implicit sexual action. She discharges the alien in an ejaculatory fashion by striking the alien in the chest, fleeing it into space. Greenberg argues that the implied male spectator voyeuristically experiences a powerfully phallic and sexually stimulating finale (Greenberg, 1993: 158-159). This somewhat 'pornographic' climax intertextually echoes the slasher film as it symbolically portrays a rapist and sexual finale, with Ripley representing the 'Final Girl.' This is highlighted when the alien is positioned behind Ripley with its metallic, extendable phallic tongue associated with sexually vulgar overtones. The diegetic scream from Ripley at the sight of the alien behind her, alludes to the Final Girl image depicted by Laurie Strode in Halloween and Nancy in Nightmare on Elm Street (Gallardo and Smith, 2004: 54-57). Dervin also argues that the new equilibrium of Alien is so cathartic and reassuring, that Ripley's pseudo-nude body carries innocent and harmless connotations, is whole and fully proportionate. ...read more.

However, these psychoanalytic elements are associated fundamentally with horrific connotations. The alien signifies the archaic mother, where the father is appropriately absent, since the mother is the all-powerful, all-dominating monster that terrorises the lives of the Nostromo crew. The alien itself represents symbolic power, illustrated by its metallic, toothed phallic weapon, symbolically as the mother's missing phallus. What makes the alien even more terrorising is that its depiction contravenes Freud's psychoanalytic notion of feminine castration. The alien is portrayed as a hermaphroditic, rapist-like powerful and faultless organism that castrates males and females, stalking its prey in a serial killer-like fashion, without any remorse. Alien also demonstrates the transposition of classic Freudian primal phantasies into the cinematic genre of the science fiction horror film, such as the primal representation of Kane's fatal fertilisation and the alien's oral conception and iconographical blood-spilling birth from Kane's stomach. The psychoanalytic reading of the film also demonstrates how Ripley, the coded slasher Final Girl triumphs at the film's finale by thwarting the alien's phallic power by blasting it orgasmically into the chasms of space. However, it is the application of Marxism to Alien that encompasses the psychoanalytic reading of Alien. Ironically, Marxism depicts the alien as a bad Company man, in an imaginary world of intergalactic class warfare. The sense of science-fiction horror is how the multinational, imperial and antimilitarist rule extends beyond the boundaries of the earth. The economic horror is centred on the alien itself, as a metaphor for the Company's dystopia and imperialist multinational power and ruling dominance. The class warfare is represented as a conflict between the deviant Company intentions symbolised by Ash and the mother computer voice on the Nostromo, and the subordinate proletariat signified by the mine workers, in an imaginary late-capitalist society. However, it is Ripley that conquers at the film's end, as a triumph for middle-class femininity that they can ideologically can save 'us' from world damnation of the Company, and from the psychoanalytic castrating mother. Ripley's humanist heroics castrate the alien and simultaneously save humanity from the fear of the castrating, phallicised mother. ...read more.

This conclusion does not really resolve the conflict between the two analytical approaches, but is otherwise very detailed and insightful.

The resolution, by the way, is very simple: the apparent conflict between the two viewpoints dissolves if we acknowledge that the film is not a particularly Marxist film despite the way it portrays class warfare. Upon closer inspection, the aesthetic (affective) and ideological (intellectual) values that it promotes are none other than those that underpin the self-image of the affluent middle-class of late capitalism.

This is true right down to the subtle sexism of the now standard representations of "empowered women" by which contemporary western society likes to fool itself that it has become ever so enlightened, fair and tolerant :)

On the whole, an excellent essay for a 2nd year, easily meriting a solid 1st.