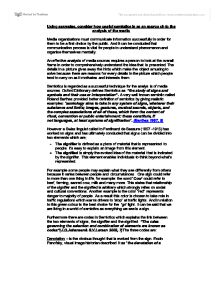 Using examples, consider how useful semiotics is as an approach to the analysis of the media

Using examples, consider how useful semiotics is as an approach to the analysis of the media Media organizations must communicate information successfully in order for them to be a first choice by the public. And it can be concluded that communication process is vital for people to understand phenomenon and organise themselves mentally. An effective analysis of media sources requires a person to look at the overall frame in order to comprehensively understand the idea that is presented. The details in a picture gives away the hints which make the object amusing to solve because there are reasons for every details in the picture which people tend to carry on as it motivates and interests them. Semiotics is regarded as a successful technique for the analysis of media sources. Oxford Dictionary defines Semiotics as "the study of signs and symbols and their use or interpretation". A very well known semiotic called Roland Barthes provided better definition of semiotics by giving realistic examples: 'semiology aims to take in any system of signs, whatever their substance and limits; images, gestures, musical sounds, objects, and the complex associations of all of these, which form the content of ritual, convention or public entertainment: these constitute, if not languages, at least systems of signification'. ...read more.

Normally the vultures in poor countries often in African continent are responsible for cleaning the environment and they are valued for their existence because government is incapable of completing this duty. Theoretically Kevin Carter had captured a moment where he suggests what might have come before the moment and what might occur after it. The stillness of the action is the concept that creates narrative tension and expectation. With effective analysis of a picture with semiotics; this photograph would highlight the very real and disturbing difference between how we might feel about an image of an actual death. Vultures are incapable of killing a prey on their own. This is the main reason why Kevin Carter put two living entities in one frame as both are incapable and in need of food in order for them to survive. They are both fighting for their existence. The girl is short distance away from the camp but does not seem to have the potential to carry on. The posture of the little girl signifies that her power has come to an end and about to loose the battle of clinging to the life. An effective interpretation of signs enables viewers to understand the idea that is tried to be communicated. ...read more.

If it's interpreted this way, an individual would be bias on the social relationship which the sign is located. For example they could have in fact been sent as an insult, joke, harassment and so on. In this example semiotics cannot be regarded as a useful approach to the analysis of the media because people could make interpretation which would change their attitudes and behaviours towards certain concepts. Another disadvantage of semiotics is that there is no final conclusion of a visual image. There are so many ideas evoked from the picture which confuses the individual's belief. In this example it brings doubt to the individual which makes them uncomfortable. In simple terms individuals are not determined by semiotics process but are shaped by them. CONCLUSION Semiotics can be regarded as crucial skill for people who want to understand the complexity and accurate analysis of media which is an important feature of the modern world. Those who doesn't have this essential skill are in danger of those skilled ones, where there own opinions will manipulate them. Bill Nichols has made this clear in one his books 'As long as signs are produced, we will be obliged to understand them. This is a matter of nothing less than survival' (Nichols 1981, 8). Given that media is the central concept of communication, people now make more accurate analysis of visual and textual language compared to old times. ...read more.