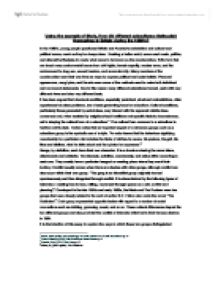 Using the example of Mods, How did different subcultures distinguish themselves in Britain during the 1960's? In the 1960's, young people questioned Britain and America's materialism and cultural and political norms,

Using the example of Mods, How did different subcultures distinguish themselves in Britain during the 1960's? In the 1960's, young people questioned Britain and America's materialism and cultural and political norms, much as they've always done. Seeking a better world, some used music, politics, and alternative lifestyles to create what came to be known as the counterculture. Briton's in that era faced many controversial issues-from civil rights, female equality, nuclear arms, and the environment to drug use, sexual freedom, and nonconformity. Many members of the counterculture saw their own lives as ways to express political and social beliefs. Personal appearance, song lyrics, and the arts were some of the methods used to make both individual and communal statements. Due to this reason many different subcultures formed, each with very different views and also very different taste. It has been argued that structural conditions, especially persistent, structural contradictions, often experienced as class problems, are a basic generating force for subculture. Cultural conditions, particularly those generated by social class, may interact with the apparent middle class consensus and, when assisted by neighbourhood traditions and specific historic circumstances, act in shaping the cultural form of a subculture.1 One cultural form common in a subculture is fashion and its style. Cohen notes that an important aspect of a reference groups such as a subculture group is the symbolic use of a style. "An actor learns that the behaviour signifying membership in a particular role includes the kinds of clothes he wears, his posture, his gait, his likes and dislikes, what he talks about and the opinion he expresses".2 Gangs, by definition, each have their own character. ...read more.

In lots of places (including London) there were mostly Mods. In the rural areas and more northern towns there were mostly Rockers. So the two groups did not bump in to one another too much unlike the representations of the press.9 As the Mods and Rockers grew in numbers and popularity, the media began publicizing their activities. The gangs developed a bad reputation through the media, who exaggerated many of their deviant acts. The community began treating Mods and Rockers like serious criminals for small acts of deviance such as sleeping on the beach and speeding on their scooters and motorcycles. Caf� owners and bartenders began to refuse them service because of the reputation they received from the media. Their newly acquired bad reputations only added to the anger and contempt the Mods and Rockers held toward mainstream society. The persistent media reporting created a sharp division between the Mods and Rockers. On Easter weekend in 1964, the rivalry created by the media between the Mods and Rockers finally boiled over in the town of Clacton. The fight between the two gangs resulted in several broken windows and the destruction of some beach huts. However, the media reported the altercation in national newspapers, suggesting there had been large scale riots and wholesale breakdown of public order. Johnny Moke and Willie Deasey were Mod's at Clacton during the 'riots', "When the pubs closed after lunchtime, there was nothing to do. Kids were just milling around. ...read more.

It was important to hear something before anyone else and to be full of information on obscure records. Ron Mitchell explains, "what I couldn't stand was that I'd say to people 'listen to this' and play some great music that they'd never heard of and they weren't interested. Then the Rolling Stones would do a poxy cover version of it and everyone would say 'isn't it great?' I really like this R&B, Stone's kind of sound".19 In conclusion it is possible to see that Mods were clearly responsible for their own identities. Through their choice of fashion and music they set their tastes as different from other cultures, such as Rockers who listened to Rock and Roll and wore leather jackets. Leah highlights this by saying "It was very important to have the right kind of clothes - the right shoes and the right skirts and sweaters, up until the Mary Quant thing you had to have a nice tweedy skirt and a Fair Isle sweater with a little circle pin at the neck on a rounded white collar. It was all about fitting in with the crowd back then." However it is also clear that if it had not have been for consumerism and the availability of goods in the 1960's then access to different materials and fashions would not have been possible and therefore Mods would have been unable to distinguish themselves in theses ways. The importance of the growth of advertisement is also important as it meant that teenagers could consult magazines and catalogues to see changing fashions enabling them to keep up to date and therefore enabling individuals to conform to Mods ideal fashions and music. ...read more.