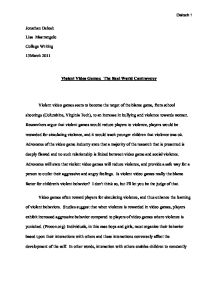 Video game violence. Violent video games seem to become the target of the blame game, from school shootings (Columbine, Virginia Tech), to an increase in bullying and violence towards women. Researchers argue that violent games would reduce players to

Jonathan Delosh Lisa Mastrangelo College Writing 13March 2011 Violent Video Games: The Real World Controversy Violent video games seem to become the target of the blame game, from school shootings (Columbine, Virginia Tech), to an increase in bullying and violence towards women. Researchers argue that violent games would reduce players to violence, players would be rewarded for simulating violence, and it would teach younger children that violence was ok. Advocates of the video game industry state that a majority of the research that is presented is deeply flawed and no such relationship is linked between video game and social violence. Advocates will state that violent video games will reduce violence, and provide a safe way for a person to outlet their aggressive and angry feelings. Is violent video games really the blame factor for children's violent behavior? I don't think so, but I'll let you be the judge of that. Video games often reward players for simulating violence, and thus enhance the learning of violent behaviors. Studies suggest that when violence is rewarded in video games, players exhibit increased aggressive behavior compared to players of video games where violence is punished. (Procon.org) Individuals, in this case boys and girls, must organize their behavior based upon their interactions with others and these interactions conversely affect the development of the self. ...read more.

If activation occurs frequently over time, then certain scripts or script networks may become easily and chronically accessible, easily triggered, and resistant to change. Repeated exposure to violent video games may lead to the development of scripts in which aggression and violence are normative behavior, indicating desensitization to violence. The desensitized individual whose behavioral scripts are primarily aggressive may not be capable of inhibiting an aggressive response once these scripts are automatically activated. For example, an innocent nudge in a crowded school hallway may trigger scripts for aggression, and aggressive behavior may result. It is worth noting that related research demonstrates that aggressive scripts are especially resistant to change. (Funk) A causal link between violent video games and violent behavior has not been proven. Many studies suffer from design flaws and use unreliable measures of violence and aggression such as noise blast tests. Thoughts about aggression have been confused with aggressive behavior, and there is a lack of studies that follow children over long periods of time. (Procon.org) Several recent reviews and meta-analyses of the game research make contrasting claims about the certainty and scope of game effects. This suggests that we have limited knowledge of what games do to or for people, and that we have even less understanding about the range of content. ...read more.

People that play violent video games exert control over what takes place on the screen. They are participants in a quasi-interactive system that allows them to regulate the pace and character of the game. This, in turn, gives them increased control over their own emotional states during play. A substantial body of research demonstrates that perceived control over events reduces the emotional or stressful responses to those events. (Goldstein) Violent video games act as a release of pent-up aggression and frustration. By allowing the child to channel his or her anger in a constructive way, video games are able to reduce the child's stress and act as a positive outlet. Children no longer throw tantrums or fight with siblings but passively act out their frustrations in a virtual world. (Kooijimaus) Video games help children minds escape from reality and focus on a fantasy world that doesn't take much thinking. It actually helps children to play video games when they are stressed so they don't go into crash mode. In conclusion, there hasn't been enough absolute research that has proved that playing violent video games cause violence. The controversy is there, but researchers can't provide flawless evidence to back it up. Violent video games is the easy way out to blame children's violence. This controversy will always stir up arguments among Americans and the effects it has on real life encounters. ...read more.