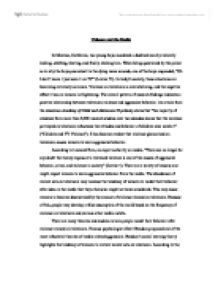 Violence and the Media

Violence and the Media In Manteca, California, two young boys murdered a disabled man by violently kicking, stabbing, beating, and finally choking him. When being questioned by the police as to why the boys poured salt in the dying mans wounds, one of the boys responded, "Oh I don't know. I just seen it on TV" (Levine 71). In today's society, these situations are becoming extremely common. Violence on television is overwhelming, and the negative affect it has on viewers is frightening. The overall pattern of research findings indicates a positive relationship between television violence and aggressive behavior. An article from the American Academy of Child and Adolescent Psychiatry states that "the majority of evidence from more than 3,000 research studies over two decades shows that the violence portrayed on television influences the attitudes and behavior of children who watch it" ("Children and TV Violence"). It has become evident that violence glamorized on television causes viewers to learn aggressive behavior. According to Leonard Eron, an expert authority on media, "There can no longer be any doubt that heavy exposure to televised violence is one of the causes of aggressive behavior, crime, and violence in society" (Levine 4). There are a variety of reasons one might expect viewers to learn aggressive behavior from the media. The abundance of violent acts on television may increase the tendency of viewers to model their behavior after ideas in the media that they otherwise might not have considered. ...read more.

In addition, The National Television Violence Study found that 85% of shows on premium channels such as HBO and Showtime contain violence (Zoglin 59). Theoretically, a person could turn their television on at any given time and view an act of violence. However, the frequency of violence on television is not the only problem. A large part of the problem lies in the way violence is portrayed on television. In real life, when a person is found guilty of committing a violent act, they are punished by some authority figure, whether it is family members or the police. However, this usually does not occur on most television shows. According to The National Cable Television Study, in 73% of the violent acts observed on television, the offender went unpunished (Zoglin 60). In this sense, television is sanctioning violence. A false message of "its okay to be violent" is being transmitted. Television producers are sending out the message that not everyone suffers from violence. For victims and their families, violence on television is depicted without much attention to the pain and suffering, both long term and immediate ("All Carnage"). Less than half of television's violent activities show the victims experiencing some signs of pain, and only one in six programs depict any long-term negative consequences such as physical suffering or emotional harm ("All Carnage"). Due to the fact that television glamorizes violence, viewers get an unrealistic look at the negative effects of this brutality. ...read more.

Education should start at home. However, fixing the problems of children and television violence is not easy. There are many factors that have to be considered and people to be convinced. This problem will, no doubt, never go away and continue to get worse as the years go by. Although there are measures that can be taken to prevent the children from ever being exposed to such things, violence in various media outlets seems to be everywhere. Given the persuasiveness of media violence, it is easy to understand how it might have an effect on its viewers. It is reasonable to believe that media directs its viewers' attention to forms of violent behavior that they might not otherwise consider. The fact that there is an abundance of violence on television can not be argued. The lesson the media teaches about the legitimacy of violence does not correspond with the reality of the situation. In addition, it is no wonder that viewers become desensitized by the abundance of violence on television. The pessimistic attitude television promotes is one that is not needed in today's already brutal society. Television may not be the only factor contributing to violence in America, but it is one that can be controlled. It is estimated that ten percent of violence in the United States can be attributed to television (Stossel 88). However, with the grueling competition of media companies fighting for viewer ratings, violence may be the only way to grab viewer attention in our ever-changing society. ...read more.