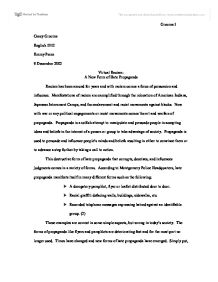 Casey Grooms English 1312 Emmy Perez 9 December 2002 Virtual Racism: A New Form of Hate Propaganda Racism has been around for years and with racism comes a force of persuasion and influence. Manifestations of racism are exemplified through the relocation of American Indians, Japanese Internment Camps, and the enslavement and racist movements against blacks. Now with war or any political engagements or racist movements comes the art and warfare of propaganda. Propaganda is a selfish attempt to manipulate and persuade people in accepting ideas and beliefs in the interest of a person or group to take advantage of society. Propaganda is used to persuade and influence people's minds and beliefs resulting in either to convince them or to advance a step further by taking a call to action. This destructive form of hate propaganda that corrupts, deceives, and influences judgments comes in a variety of forms. According to Montgomery Police Headquarters, hate propaganda manifests itself in many different forms such as the following: > A derogatory pamphlet, flyer or leaflet distributed door to door. > Racial graffiti defacing walls, buildings, sidewalks, etc. > Recorded telephone messages expressing hatred against an identifiable group. (2) These examples are correct in some simple aspects, but wrong in today's society. The forms of propaganda like flyers and pamphlets are deteriorating fast and for the most part no longer used. Times have changed and new forms of hate propaganda have emerged. Simply put, hate groups are afraid of a fast changing world where they might be abandoned in views. Racist organizations are now adapting to the environment by shifting their tactics and strategies to concur with ever changing time and society. According to Loretta Rosa, author of Ethnic Violence, "White supremacists desperately need to reinvigorate their movement with new recruits by manipulating white fears into action" (79). To advance their messages, hate organizations must catch people in a vulnerable state, and use their fears to corrupt them. ...read more.

Nathaniel Sheppard Jr. is a Washington correspondent for the Chicago Tribune, and author of Racist Groups Are Thriving on the Internet, comments on the spread to hate propaganda on the Internet. Sheppard begins his introduction by stating: Ku Klux Klan used to terrorize people in the dead of the night with ropes, and burning crosses. Now it sneaks in quietly through home computers and elicits pictures of horror and high-tech messages of hate. Spreading hate has become easy, inexpensive, and unrestricted. (24) Hate groups are adapting to this high-tech world and using it to their advantage. As Sheppard states, it is "...easy, inexpensive, and unrestricted." The easier it is to create a web site, the easier it becomes to access it. Racist websites propagating the advancement of white supremacy have sprang up and are now countless. Websites such as National Alliance, Resistance Records, New World Order, Aryan Nation, and KKK online and other white supremacy sites or neo-nazi sites have infiltrated the Internet like annoying parasites living off the deprivation of their hosts. These numerous sites make it easier for children through irrational adults to access this hate related material. A website entitled "Las Vegas Skinheads" showed the amount of visitors since the website was established and read 15504 visitors. These websites advertise and sell hate paraphernalia to spread their views to anybody ignorant enough to listen. Their products are relatively cheap in comparison to same products of a higher stature. For example, "Ethnic Cleansing" which is administered under Resistance Records sells the game at a very low price of $14.88 and will be shipped domestically or even internationally. Usually games for the computer running by CD-ROM format should cost well above $30. This CD-ROM game is at a "steal" when compared to similar non-hate games such as Grand Theft Auto 3 averaging from $30-$60. Hate sites also sell items such as t-shirts, buttons, stickers, hats, other hate items that can display "team logos" and messages. ...read more.

"Ethnic Cleansing" should be rated R for Racism. Governmental regulation could be to have strict control over the sale and rental of video games, especially violent rated ones. Just like the strict sale of cigarettes and alcohol where one has to be of legal or certain age to purchase these items that are detrimental to ones health. There could be ID checks done to enforce the restricted sale or rental of games. The government could also control the amount of violence in a video game. Therefore, virtual forms of hate propaganda contribute to negative effects in society. Hate propaganda in any form (in this case - Virtual Reality form), can lead to violent acts in the future. They increase aggression and hostile behavior while in the process of propagating hate messages. The accessibility of the hate messages like "Ethnic Cleansing" needs to be regulated and controlled. Almost anybody, no matter how young or old, can access these racist video games or Internet sites with immense ease. Racist groups play off the vulnerability of young minds and the dissatisfaction of adults to recruit them into the practice of racism. Virtual reality is not a safer way to kill and exterminate a specific civilization of non-whites; this claim is ignorant in itself. Children do not have the mental capabilities to distinguish between what is real and what is fantasy. While the manipulation of video games in turn creates manifestations of this increased aggression and can be seen by examples like the Columbine High School shootings. Actually violent video games integrated with racism could be more devastating than Columbine shootings because these games carry the potential for more shootings to occur. White supremacist and hate organizations have now shifted their tactics and strategies to advance with society. Governmental intervention is eminent in needing to regulate this protected form of virtual hate crimes and propaganda. Racist organizations are now using the virtual realm of cyberspace, as a means to propagate there hate messages on the Internet or -Devils' Playground. Grooms 18 ...read more.