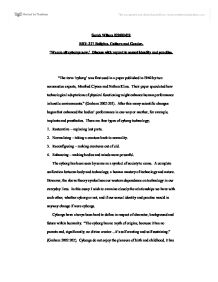 'We are all cyborgs now.' Discuss with regard to sexual identity and practise.

Sarah Wilson 022600419 RST: 317 Religion, Culture and Gender. 'We are all cyborgs now.' Discuss with regard to sexual identity and practise. "The term 'cyborg' was first used in a paper published in 1960 by two aeronautics experts, Manfred Clynes and Nathan Kline. Their paper speculated how technological adaptations of physical functioning might enhance human performance in hostile environments." (Graham 2002:201). After this many scientific changes began that enhanced the bodies' performance in one way or another, for example, implants and prosthetics. There are four types of cyborg technology; 1. Restorative - replacing lost parts. 2. Normalising - taking a creature back to normality. 3. Reconfiguring - making creatures out of old. 4. Enhancing - making bodies and minds more powerful. The cyborg has been seen by some as a symbol of society to come. A complete unification between body and technology, a human mastery of technology and nature. However, the above theory symbolises our western dependence on technology in our everyday lives. In this essay I wish to examine closely the relationships we have with each other, whether cyborg or not, and if our sexual identity and practise would in anyway change if were cyborgs. Cyborgs have always been hard to define in respect of character, background and future within humanity. "The cyborg has no myth of origins, because it has no parents and, significantly, no divine creator...it's self creating and self sustaining." (Graham 2002:202). Cyborgs do not enjoy the pleasure of birth and childhood, it has never experienced an age of innocence and ignorance, and without a notion of a divine creator or a god then the cyborg may never adequately dispute on theological matters. As a society are we to "dissolve the distinction between the 'born' and the 'made'." (Graham 2002:202). Cyborgs are commonly portrayed as the loner, a minority, with no biological family or religious inclinations. The study of psychology becomes irrelevant for cyborgs and in contrast with Christian humanity, a cyborgs goal is not to return to the Garden of Eden or God. ...read more.

An example against this is Star Trek Voyagers' Borg crew mate, seven of nine, who fought against humanity and individualism, in an effort to return to a state of perfection and the 'collective'. Against popular ideals of fighting against the establishment and 'assimilation' this Borg woman actively wants to return to a zombie or 'drone' state of which she views as perfection. However, media bosses have attempted to curb too much controversy by making the character discover her 'humanity' and soften her cold image with a love interest. Seven's instructed separation from the borg collective is a perfect example of the fear that grips society toward the idea of us all becoming cyborgs although we are all ironically 'drones' of the everyday. The Borg, as a collective, are viewed as lethal killers and once assimilated there is no struggle between human (or alien) physiology and technology. Their victims who become assimilated into the collective are seen as losing the essential qualities of humanity; free will and independent thought. The main point here is that men and women are portrayed differently in cyborg roles. Men, the positive and indestructible hero's/saviours and women as the radical anarchists. For example in Terminator 3, the Terminator (man) wants to save the main character whereas T3 (the woman) want to kill him. Ironically however in the first Terminator he was designed to kill the main characters' mother, yet he still remains the hero and revered for his abilities. Arnold Swartzenger himself strived for a better than human or cyborg body in real life with his bodybuilding. In a ironic twist the Terminator and his leather jacket brings with it a hint of gay culture, I don't however think this was intended and the character was most probably a stereotypical image of a 'butch' guy. Is this hyper masculinity not another form of removal form the natural order? Is anyone actually like that? In the movie Terminator 2, the Terminator was a father figure to the character of John Connor. ...read more.

Although, not many succeed and those who do meet are often disappointed by their Internet counterpart. It seems that the outside world and society are not as seductive and exciting as their cyberspace world. It seems that in the scientific world the move from human to cyborg seems a certain future. However, the question I pose in this essay is whether we are all cyborgs now and according to a multitude of sources I have looked at, certain individuals are, in many respects, but not all of us are yet. This idea of becoming neither distinguishable as human or machine but a complete cyborg is contested by Professor Noel Sharkey, who on an online debate suggests that "its unlikely that anything we think of as a robot will be indistinguishable from a human. I believe that metal will never be mental." (www.bbc.co.uk, 12/11/03). Many scientists are now contesting whether cyborgs and their creation is actually a good idea, what are the repercussions? The advent of Artificial Intelligence (AI) highlights deep-set problems of control over computer components. Scientists fear that the machines will take over and destroy all life on Earth, however if one takes a close look at the world today are we not destroying the Earth anyway? Science fiction has always cultivated aggressive ideas for and against scientific developments. Mark O'Brien presents an alternative point of view in that we have forsaken aspects of the body which aren't perfect to become cyborgs, "our impulse to invent has come from a desire to supplement our strength or our senses"(Mark O'Brien quoted in Springer 1996:26). So in conclusion, Mark O'Brien proposes that the key to our humanity is choice. Whether we choose to be cyborgs or not. However, some have already made that choice, usually unwittedly. We, as a society, heavily contest the idea of choosing to become a cyborg yet half of us already are. To sat that we are not heavily dependant on machines already is preposterous. However, as Haraway eloquently puts it; " I would rather be a cyborg than a goddess." (Haraway 1991:181). ...read more.