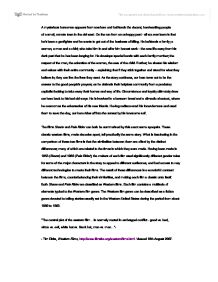 Western Film - Comparison of Shane and Pale Rider. hese classic western films, made decades apart, tell practically the same story. What is fascinating in the comparison of these two films is that the similarities between them are offset by the distinc

A mysterious horseman appears from nowhere and befriends the decent, hard-working people of a small, remote town in the old west. On the run from an unhappy past - all we ever learn is that he's been a gunfighter and he wants to get out of the business of killing. He befriends a family; a woman, a man and a child; who take him in and offer him honest work - the new life away from his dark past that he has been longing for. He develops special bonds with each family member; the respect of the man, the adoration of the woman, the awe of the child. Further; he shares his wisdom and values with their entire community - explaining that if they stick together and stand for what they believe in; they can live the lives they want. As the story continues, our hero turns out to be the answer to the good people's prayers; as he defends their helpless community from a predatory capitalist looking to take away their homes and way of life. Circumstance and loyalty ultimately draw our hero back to his bad old ways. He is involved in a barroom brawl and a climactic shootout, where he overcomes the adversaries of his new friends. Having rediscovered his inner-demons and used them to save the day, our hero rides off into the sunset by his lonesome self. The films Shane and Pale Rider can both be summarised by this exact same synopsis. These classic western films, made decades apart, tell practically the same story. What is fascinating in the comparison of these two films is that the similarities between them are offset by the distinct differences; many of which are related to the times in which they were made. Having been made in 1953 (Shane) and 1985 (Pale Rider); the makers of each film used significantly different gender roles for some of the major characters in the story to appeal to different audiences, and had access to very different technologies to create their films. ...read more.

Megan, a precocious child of fourteen is ready to give her young love to the answer to her prayers, the Preacher. Turning Joey into a teenage girl makes the hero to child relationship extremely different. When Joey tells Shane he loves him, it is a statement of respect and admiration; a belief in Shane as a role model and an endorsement of the pure frontier values he represents. In Pale Rider, such sentiments are replayed, but in a highly sexualised tenor. Megan even goes so far as to ask Pale Rider to marry her when she turns fifteen, and to show her the ways of physical love. In this way, she seeks to learn from the Preacher in the same way as Joey does from Shane but the child-like innocence of the boy's gaze is lost amidst an adult interest in sex. In one sense, what is displayed is perhaps a comment upon the effects of the sixties, that family values and traditional sensibility has suffered because of the because of free love and rebellion. However, another reading of this would suggest that this concern with family offers a version of America that is in chaos, a place where traditional roles, whether they are gender roles or heroic models, are no longer stable. The simply mythology of the Western is now more complex, the mythology is no longer as universal, innocence is no longer a given. These specific differences in the gender roles of the characters between the films could be seen as a direct result of the era's in which each film was made. The film makers of each film had to appeal to the sensibilities of audiences in two extremely different eras. 5 5 Bruce A. Austin Immediate Seating: A look at Movie Audiences (Belmont, Cal: Wadsworth), Ch.3, pp 44-58 The early 50s were known for many things: post-war affluence and increased choice of leisure time activities, conformity, and middle-class values. ...read more.

They are one of the oldest, most enduring and celebrated genres and one of the most characteristically American genres in their mythic origins. The earlier Western films were generally made with a family-appeal; as can be seen in Shane; and over time have become more edgy and gritty; with an emphasis on violence and realistic character-depth; as can be seen in Pale Rider. Though the makers of Western films over the past century have had to appeal to different audiences and had the use of different technologies, the Western film genre has maintained its original purpose as a nostalgic eulogy to the early days of the expansive, untamed American frontier. The Western film genre is one of American's most enduring film genres, with a wide base of appeal through portrayals of a time that although brief, made a huge impact on the fermenting of the American state. Both Shane and Pale Rider, though made in different eras of film history, share closely aligned plot and story arches. Although the films utilise similar plot lines there are distinct 8 Pale Rider Clint Eastwood, The Malpaso Company, 1985 (Technical specs from DVD cover) difference in gender issues such as the role of women in the western, women as mere devises for story in Shane or as characters who impact on the dramatic qualities of the film Pale Rider. The eras of the films origins also make the appearance of the films distinct, the homely quality of Shane in comparison to the gritty, grotesque appearance of Eastwood's Pale Rider. As a result, the two films appeal to different audience bases, one more in touch with a simper methodology of storytelling, the other more mature and more ready at accept the brutality of the west and its sometime uncertain morality. These two films highlight important milestones in the progression of the western genre as it has matured and moved away form the mythology of the moralistic cowboy, enacted through simple family orientated storytelling, to a more complicated and realistic set of films that represent a more honest re-enactment of this important part of American history. ...read more.