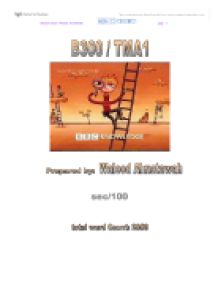 . What are the advantages and disadvantages of the BBC:

sec/100 Q1. What are the advantages and disadvantages of the BBC: a) Producing its own programes (as opposed to commissioning others to make programes for it) b) Competing for rating s with other television channels (as opposed to being a public service broadcaster) c) Being a global player (as opposed to being a UK provider) The BBC as public service broadcasting receiving license fee form government plus selling radio receivers. has brought up a set of ideological and often political stereotypes, born in the main from overall demeanors of middle class, institutionalized beliefs and practices. Post 1946, when television broadcasting resumed, the BBC's popularity was at its height, largely because of its part in the nation's efforts during the Second World War, the BBC. Now, in the 21st century, has to redefine itself to both the public and politicians. They shares many of the current crisis' in broadcasting, as expected issues surrounding funding/revenue and it is also having to reconsider its position in terms of self opinion and audience perception. BBC has developed into one of the world's leading broadcasting and programmer makers. I will answer this question by defined the advantages and disadvantages of the BBC on the following issues: o Producing its own programmes. o Competing for rating with other television channels. o Being a global player. Producing its own programmes The BBC had been forced by the government to be come more businesslike or towards a commissionig to have the ability to compete with the ITV's in the broadcasting world. The advantages is: o High quality programmes producer: The most important advantage for the BBC when it produce it own programmes, it has the reputation as a creator of high-quality, creative programmes which become benchmarks of programme excellence in the world, of course the whole system in the BBC (structure, internal system, management system etc.) working toward the major goal of the cooperation which is design and production of high quality programmes as anther advantage form produce it own programmes. ...read more.

No body denied that BBC has huge contribution on the British social life and culture both at national and international. Most of British citizens who want to see that contribution maintained into the multi-channel future. Which make the pressure on the BBC to change and adjust itself to the speedily changing demands of that future. The nation needs a BBC that delivers high standard, innovative broadcasting that nurtures British talent, which present the nation to itself, and that respects the contributions made by the other players in the media world. To fallow that changes needs right decision to avoid flawed decision to the organization has, decision-making is an important part of all managerial functions performed .BBC has to use the knowledge concentrated process that demands good management of information to produce a preferred process outcome. In taking decision-making I advice the top-manager in BBC to take in consideration the actual process of organizational decision making, which will not only avoid making flawed decisions with respect to their response to the three strategic dilemmas, also enhance the image of the BBC in the whole world the 'process of organizational decision making' has the following: o Organizational goals: which mean that the top manager in organization should consider how goals occur in an organization and how goals will change over time, and how they should act and respond to these changes of goals? In BBC the union members include managers, employees, stockholders, suppliers, clients, , tax collectors has one vision, that top manager have to take in consideration that the goals must deal effectively with the probable for internal goal conflicts existed in a coalition of diverse individuals and groups. Since the existence of unresolved conflicts among organizational stakeholders, which will reflect on the feature of the organizations, it is difficult to construct a useful descriptively exact suggestions of the organizational decision making process if they insist on internal goal consistency. ...read more.

The BBC talent movement addresses the issue of fright talent in a public service spirit while at the same time the corporation is still attempting to retain recognized talent with well-paid deals. This anxious balance of ratings versus public services appears to leak into the BBC's decisions, arising as it does from the up normal of the financial support system, which requires both minority programming and rating to excuse its maintenance. Dilemma 3: Global organization V. UK Provider The public service broadcasters worldwide are struggling with the dilemmas of finding a clear role in the new media landscape. The BBC is better placed than other has succeed with its massive guaranteed funding, which able the BBC to expand in the global market, but still operating within the framework of national programme considerations. The BBC should- some argue - moved into a niche area, providing only quality educational, information programmes not available on commercial channels. Like the PBS in USA, in that case the BBC can fulfill its public service obligations and become better to face the global giants. The BBC and its supporters would argue that the expansion programme is necessary in order to guarantee the continuing exciting of the corporation, and UK public service broadcasting, in the changing and increasingly competitive media landscape. Nevertheless, the government regulations required a proportion of programmes to be made in the regions also holds back exports, as international viewers find them difficult to understand. The British media industry as a whole has failed to exploit new markets, allowing others to gain access. The arrival of satellite and cable chancels in the UK created a great hunger for content that was eventually filled by US broadcasters on account of the failure of UK broadcasters to supply' new markets in deregulated Europe were filled by Australian companies. Within domestic TV market only 1/4 of the size of the UK 's. (word count 720) Attachment ?? ?? ?? ?? Student name: Waleed Almatawah page 1 ...read more.