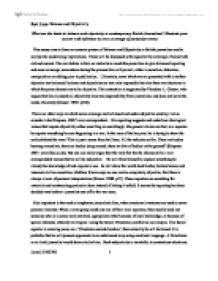 What are the limits to balance and objectivity in contemporary British Journalism? Illustrate your answer with reference to news coverage of particular events This essay aims to form an accurate picture of Balance and Objectivity in British journalism and to analyse the underlining implications. These will be discussed with regard to the coverage of news both old and current. The real debate is that, no matter how much the press tries to give balanced reporting and news coverage, somewhere during the process bias will prevail, either in selection, distortion, manipulation or editing prior to publication. Ultimately, news which we are presented with is neither objective nor balanced: balance and objectivity are not only impossible but also there are situations in which the press chooses not to be objective. This contention is supported by Theodore L. Glasser, who argues that bias is essential; objectivity removes responsibility from journalism, and does not serve the needs of society (Glasser: 1992: p182). There are other ways in which news coverage can be biased and under subjective scrutiny. Let us consider John Simpson, BBC's war correspondent. His reporting suggests and underlines ideological values that impede objectivity either unwilling or unwittingly. ...read more.

This can be through access to news or through manipulating and misleading journalists, into creating their own particular image. These people might not have direct control over news, but they do know the back routes to publicity. Let us remind ourselves of the history of New Labour and how the elections of 1997 and 2001 won them power. The party possesses strong PR which has earned the title, Labour spin; Alistair Campbell won for himself the legendary title 'spin doctor'. It is clear that these two election wins were only possible because of the active involvement of newspapers, the majority of whom were admirers of the Labour party: The outcome of the 1997 and the 2001 campaigns did lend support to former journalist and now labour MP Martin Linton's claim that it is impossible for any party to win a British general election without a majority of the press (as measured in share of circulation) behind it. In 1992, with only 27 percent of circulation in its support, Labour lost. In 1997 and 2001, with considerably more than 50 percent, it won. (McNair: 2003: p60-1) ...read more.

News only becomes newsworthy when it has cultural significance or affects society. Relevance is relative: local issues such as a rapist on the run in your local area, deemed as a public threat, will be highly significant to people in the locality; but less significant nationally. Nationally something big, unexpected or rare deserves more attention. Currently Iraq is significantly on the news agenda as being relevant. However, as the story becomes old, reader's interest will wane; the big story will be viewed as less significant because it has become too old and dull; it will then only be worth reporting when there are new changes to it. Rare or unexpected newsworthy stories will include things such as the sudden death of Christopher Reid, a moon landing or the discovery of a prehistoric skeleton. "It is the unexpected within the meaningful and the consonant that is brought to one's attention and by 'unexpected' we simply mean essentially two things: unexpected and rare" (Gaultung and Ruge: 1973: p65). To conclude, there are numerous limitations to the extent objectivity can be achieved in journalism. Subjectivity will prevail, be it deliberate, through human error or subconscious. As this essay has demonstrated, total impartiality is impossible: we are guided, almost subconsciously, by our cultural and ethical values and interests. ...read more.