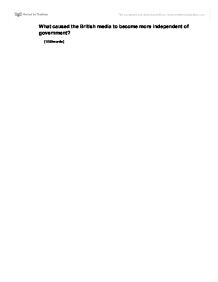 What caused the British media to become more independent of governement?

What caused the British media to become more independent of government? [1500words] What caused the British media to become more independent of government? Currently, according to the BBC, "The British media are free and able to report on all aspects of British life. The variety of publications reflects the full spectrum of political opinion, as well as the British public's voracious appetite for newspapers," (BBC, 2010), however, during the 17th century, the British press was strictly controlled. It was not until, in 1695, when Parliament decided against renewing the Licensing Act, that newspaper circulation increased and censorship was reduced. Thus a free press was allowed to grow (The British Library, 2010). In this essay I will present key dates for significant changes within the timescale of these differences, and attempt to explain what social and political changes occurred, which have helped to bring about this supposed independence of media in Britain today. The Liberal interpretation of media history, or at least one strand of it, makes the argument that the freeing of the press led to wider social democracy and empowered the public. The extension of parliamentary franchise between 1832 and 1928 took away property restrictions and gave women an equal vote, allowing for more and more people to be actively included in politics (Curran, 2002:136). ...read more.

The events of the Cold War could potentially have been a threat to Western democracy. Along with a sudden peacetime relaxation on media regulation and censorship, this idea of pushing forward democracy strengthened the independent media. Any overt sign of censorship could ring similar to the state-run and strictly controlled Soviet system in the minds of the public; the freedom of the press must be one of the goals of a truly democratic society. As Craig Lamay remarks; "If a people are to be sovereign, they must be able to receive a wide variety of ideas, to criticize the government and, more generally, to circulate information related to public affairs," (Lamay, 2006). Almost immediately after the war, there was a consensus in Britain not to return to the same economic depression of the inter-war period, which was widely conceived to be down to the Liberal government in power in 1918. That considered; one of the first most successful instances of the media acting as the 'voice of the people' is the July 5th edition of the Daily Mirror in 1945 calling for the readers to vote (without once mentioning the party by name) for Clement Attlee's Labour Party. In a time of newsprint rationing and page-space being scarce on newspapers, a political cartoon was shown on the front page, taking up probably ninety percent of the layout, with an accompanying article (The British Library, 2010). ...read more.

In conclusion to this essay and in response to the title question, I believe that the root cause of British media becoming independent is the expectation by the public and critical journalists for the media to act as a fourth estate, to provide a service and be a protective force. While over the years and across multiple centuries the media, and all forms of it have had periods of more or less regulation, as a general trend it has liberalised and freedom of expression has increased as society has changed. The reasons for this are unclear one possibility is that, if there were previous attempts to maintain social order through censorship, the risk of the media as a threat to this order has diminished as media has changed to become more centred upon entertainment and profit. In spite of this it is important to remember that, while it would appear that government intervention has lessened, government still has the last word when it comes to restricting publication or exhibition, for example even if a film manages to pass the BBFC, local councils can block a films screening, and have done various times in the past. Another point is that government can exert control on the media, arguably because of the protection of freedom of expression at this time in history, the collective media have a much larger amount of power in affecting government. ...read more.