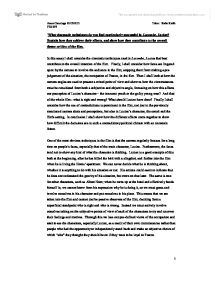 `What cinematic techniques do you find particularly successful in Lacombe, Lucien? Explain how they achieve their effects, and show how they contribute to the overall theme or idea of the film.

`What cinematic techniques do you find particularly successful in Lacombe, Lucien? Explain how they achieve their effects, and show how they contribute to the overall theme or idea of the film. In this essay I shall consider the cinematic techniques used in Lacombe, Lucien that best contribute to the overall intention of the film. Firstly, I shall consider how faces are lingered upon by the camera to involve the audience in the film, stopping them from making a pre-judgement of the situation, the occupation of France, in the film. Then I shall look at how the camera angles are used to present a mixed point of view and show us how the circumstances must be considered from both a subjective and objective angle, focussing on how this affects our perception of Lucien's character - the innocent youth or the guilty young man? And that of the whole film - what is right and wrong? What should Lucien have done? Finally I shall consider how the use of contradictions is prominent in the film, not just in the previously mentioned camera shots and perceptions, but also in Lucien's character, the sound and the film's setting. ...read more.

It also brings to our attention that we see the film from the objective point of view of the observer as well as the subjective view of the characters. The same way the occupation of France, and similar situations represented in the film, have to be seen from the subjective point of view of people involved as well as the objective view of hindsight. When Lucien observes conversations the camera is at a low angle, suggesting Lucien's youth and that he does not fully understand the implications of the conversations he sees, but at the same time we are confronted with the fact he has made decision to be involved in the German Police. This presents us with the dilemma as to how much Lucien understands of his participation and how much is just from the will to be grown up and ape the others, how can we judge when we know so little of his or anyone else's thoughts and circumstances. Contradictions such as the mature-immature dilemma we have over Lucien appear throughout the film. In Lucien himself we see that he remains silent through large amounts of conversations, and even when he is with his friend at the beginning he does not talk much. ...read more.

This subjective-objective contrast is reflected in the camera angles chosen when Lucien is observing conversations; we see what he sees but cannot actually guess what he is thinking. Low camera angles are also used so he seems somewhat childish when he is being talked to. This means we have a dilemma as to whether he is fully aware of the situation; is he too young to understand? Contrasts between what we think and what happens increase this unease over his awareness especially when we see that his normal interests lead him into greater involvement with the German police. Further contradictions figure widely in increasing the tension and uneasiness in our minds: the safe idyll with its oppressive evil, torture with laughter and music. All of this comes together to take us away from our ingrained views on such a situation and show us how difficult it is for people involved to make some kind of objective choice, which with hindsight we expect them to do. Through these effects the film shows us how difficult it should be to sit in judgement over people in circumstances such as these. Anna Cannings 01120125 Tutor: Katie Keith FR1509 1 ...read more.