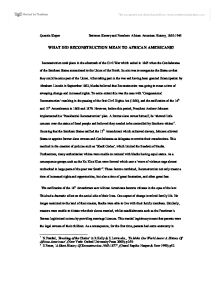 What did reconstruction mean to African Americans?

Quentin Sloper Between Slavery and Freedom: African American History, 1865-1945 WHAT DID RECONSTRUCTION MEAN TO AFRICAN AMERICANS? Reconstruction took place in the aftermath of the Civil War which ended in 1865 when the Confederates of the Southern States surrendered to the Union of the North. Its aim was to reorganise the States so that they could become part of the Union. After taking part in the war and having been granted Emancipation by Abraham Lincoln in September 1862, blacks believed that Reconstruction was going to mean a time of sweeping change and increased rights. To some extent this was the case with 'Congressional Reconstruction' resulting in the passing of the first Civil Rights Act (1866), and the ratification of the 14th and 15th Amendments in 1868 and 1870. However, before this period, President Andrew Johnson implemented his 'Presidential Reconstruction' plan. A former slave owner himself, he 'showed little concern over the status of freed people and believed they needed to be controlled by Southern whites'1. Ensuring that the Southern States ratified the 13th Amendment which outlawed slavery, Johnson allowed States to appoint former slave owners and Confederates as delegates to rewrite their constitutions. ...read more.

A small minority of blacks did become landowners, whilst others attempted to lease land. Unsurprisingly, the cost of such ventures was deliberately extortionate , whilst vagrancy laws, enforced at the beginning of Reconstruction, stated that blacks had to be employed by whites or risk arrest. This was obviously a deliberately imposed disincentive for blacks who were trying to buy their own land. As a consequence, 'most African Americans were doing the same kind of work as they had done as slaves'8. The obvious difference was that the law now stated that white owners had to pay blacks for their work, or take part in 'crop sharing'9. However, despite the fact that the Freedman's Bureau often helped to organise contracts, their rate of pay was considerably lower than that of a white man, whilst the crop failures of the mid 1870's often meant that their employers failed to pay them at all. Although the National Negro Union was eventually founded, the majority were not represented by any union. As a consequence, they were often helpless. Laws imposing strict laws on African American fishing were also introduced. Unable to fish for food, blacks were forced to work in order to provide for their families. ...read more.

In conclusion it is obvious that Reconstruction meant that the rights of blacks did improve, and was a time of hope and a 'push in the right direction'17, for black equality. The months after the war did result in many changes and 'was a period of remarkable accomplishment for Southern blacks'.18 'Presidential Reconstruction' was however somewhat disappointing. Black Codes established certain practices that were never entirely eradicated irrespective of Congressional attempts, whilst giving land back to former slave owners ensured that blacks never made the economic advances which they had hoped for. There were also political advances and many social changes. However many of these were marred or even obstructed by groups such as the Ku Klux Klan. Furthermore, it is important to remember the Reconstruction did not last forever. In 1872 the vote was given back to former Confederates. This saw the Democrat Party regain control of many of the Southern States, and reinforce their racial bias. Similarly, after the 1876 Presidential election, the Republicans, desperate for harmony, agreed to let Southern States disenfranchise black men. As a consequence, although the initial period of Reconstruction meant that many blacks felt that they 'had progressed a century in a year'19, the meaning of the rest of Reconstruction was somewhat unclear, with the long lasting changes expected by blacks failing to become reality. ...read more.