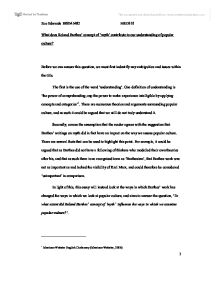 What has Roland Barthes' idea of myth contributed to our understanding of popular culture?

What does Roland Barthes' concept of 'myth' contribute to our understanding of popular culture? Before we can answer this question, we must first indentify any ambiguities and issues within the title. The first is the use of the word 'understanding'. One definition of understanding is 'the power of comprehending; esp the power to make experience intelligible by applying concepts and categories'1. There are numerous theories and arguments surrounding popular culture, and as such it could be argued that we still do not truly understand it. Secondly, comes the assumption that the reader agrees with the suggestion that Barthes' writings on myth did in fact have an impact on the way we assess popular culture. There are several facts that can be used to highlight this point. For example, it could be argued that as Barthes did not have a following of thinkers who modelled their own theories after his, and that as such there is no recognised term as 'Barthesism', that Barthes work was not as important as and lacked the visibility of Karl Marx, and could therefore be considered 'unimportant' in comparison. In light of this, this essay will instead look at the ways in which Barthes' work has changed the ways in which we look at popular culture, and aims to answer the question, 'To what extent did Roland Barthes' concept of 'myth' influence the ways in which we examine popular culture?'. ...read more.

L�vi-Strauss was an anthropologist who applied Saussure's theories to his own area of study (such as kinship). He believed that 'Although they belong to another order of reality, kinship phenomena are of the same type as linguistic phenomena'5. L�vi-Strauss believed that there would be one standardised system connecting all myths and societies, and Barthes adopted this approach6. Barthes and L�vi-Strauss came up with fairly similar ideas, and it seems accepted that Barthes would be attracted to his findings of similarities structural elements in the lives and tales of varied tribes. L�vi-Strauss wrote: 'With myth, everything becomes possible. But on the other hand, this apparent arbitrariness is belied by the astounding similarity between myths collected in widely different regions'7 Barthes built upon the work of his icons - he did not believe in adopting inferred ideologies, regardless of their source. With Saussure, Barthes introduced the idea of 'the motivated' in as a concept in between 'the icon' and 'the arbitrary'. With L�vi-Strauss' work, Barthes wanted to look at all past and future works through the language the authors used, arguing that authors could not help but be no more than expressions of the times and cultures they lived in.8 Barthes and the schools of thought Barthes' insightful criticism contributed greatly to the development of various theoretical schools - in particular, Semiotics and Post-Structuralism. ...read more.

The myth function allows interpretation to become fact; this transforms the cultural into the natural and can be argued to be a political practice13. Building on Barthes, Weber talks about the theory of 'unconscious ideology'- an ideology which has no formal name and as such is difficult to identify: it is the commonsense foundation of our world views which are beyond debate. Although there is no one canon of thought within his theory, Barthes is arguably one of the most influential scholars in the area of mass communication and popular culture. It is undoubtedly agreed that Barthes' work had a great influence upon the way we examine not just popular culture, but also other aspects of media. Jonathan Culler describes him as 'a cultural institution'14, whilst Wayne Booth once said of him '(he is) the man who may well be the strongest influence on American criticism today'15. Barthes' thoughts were affected by existentialism, Marxism, structuralism and psychoanalysis. He developed these philosophical ideas and theories, and in turn had influence on later theorists. Some would argue that the lack of 'Barthesism' today means that his work was not influential or important. However, Barthes himself spoke publicly about his distaste of adopting pervious theories - even his own. Instead, he preferred to 'unlearn' all his previous ideas, and become a true free thinker. ...read more.