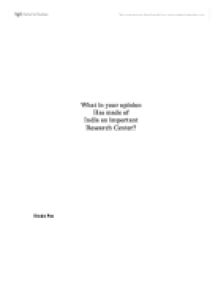 What in your opinion Has made of India an important Research Center?

What in your opinion Has made of India an important Research Center? Dierdre Pina Science and technology have influenced the course of human civilization. Science has provided us remarkable insights into the world we live in. The scientific revolutions of the twentieth century have led to many technologies, which promise to declare new eras in many fields. As we stand today at the beginning of a new century, we have to ensure the fullest use of these developments for the well being of society. Science and technology have been an integral part of Indian civilization and culture over the past 1000 years. Few individuals are aware that India was the source of important foundational scientific developments and approaches. This includes many great scientific discoveries and technological achievement in mathematics, astronomy, architecture, chemistry, metallurgy, medicine, natural philosophy and other areas. A great deal of these discoveries and approaches have traveled beyond India. India also assimilated scientific ideas and techniques from elsewhere, with open-mindedness and a rational attitude which is characteristic of a scientific culture. India's traditions have been founded on the principles of universal harmony, respect for all creation and an integrated holistic approach. This background is likely to provide valuable insights for future scientific advances. During the century prior to independence, there was an arousal of modern science in India through the efforts of a number of outstanding scientists. ...read more.

Encouraging quality and productivity in science and technology, mobility of scientists and technologists between industry, academic institutions and research laboratories will be ensured. For building up the human resource base in relevant areas, the agencies and departments concerned with science and technology will make available substantial funding from their allocation. Flexible mechanisms will be put in place in academic and research institutions to enable researchers to change fields and bring new inputs into traditional disciplines, and also to develop inter-disciplinary areas. India has placed emphasis on the continuing process of retraining to keep pace with the rapid advances taking place. Wherever considered necessary, training abroad will be resorted to, so as to build up a skilled base rapidly. Women constitute almost half the population of the country. They have recently been provided significantly greater opportunities for higher education and skills that are needed to take up research and development as a career. To ensure their well being new procedures, and flexibility in rules and regulations, have been introduced to meet their special needs. New mechanisms have been instituted to facilitate the return of scientists and technologists of Indian origin to India, along with their networking, to contribute to Indian science and technology. Schemes for continuing education and training of university and college teachers in contemporary research techniques and in emerging areas of science have been strengthened and new innovative programs started. ...read more.

* To encourage research and application for forecasting, prevention and mitigation of natural hazards, particularly, floods, cyclones, earthquakes, drought and landslides. * To promote international science and technology cooperation towards achieving the goals of national development and security, and make it a key element of our international relations. * To integrate scientific knowledge with insights from other disciplines, and ensure fullest involvement of scientists and technologists in national governance so that the spirit and methods of scientific enquiry permeate deeply into all areas of public policy making. The Directive Principle contained in Article 45 enjoins that "the State shall endeavor to provide within a period of ten years from the commencement of this constitution, for free and compulsory education for all children until they complete the age of fourteen years". Article 29 (I) provides that any citizen having a distinct language, script, special care of the economic and educational interests of the underprivileged sections, particularly, the Schedule Castes and Scheduled tribes is laid down as an obligation of the state under article 46. Though education is the concurrent list of the constitution, the State Government plays a very major role in the development of education particularly in the primary and secondary education sectors. (www.indianinbusiness.nic) Biblography http://www.indianinbusiness.nic.in http://india.gov.in/sectors/education.php http://india.gov.in/knowindia/culture_heritage.php http://india.gov.in/sectors/education.php Science and Engineering Research Council www.serc-dst.org Survey of India www.surveyofindia.gov.in ...read more.